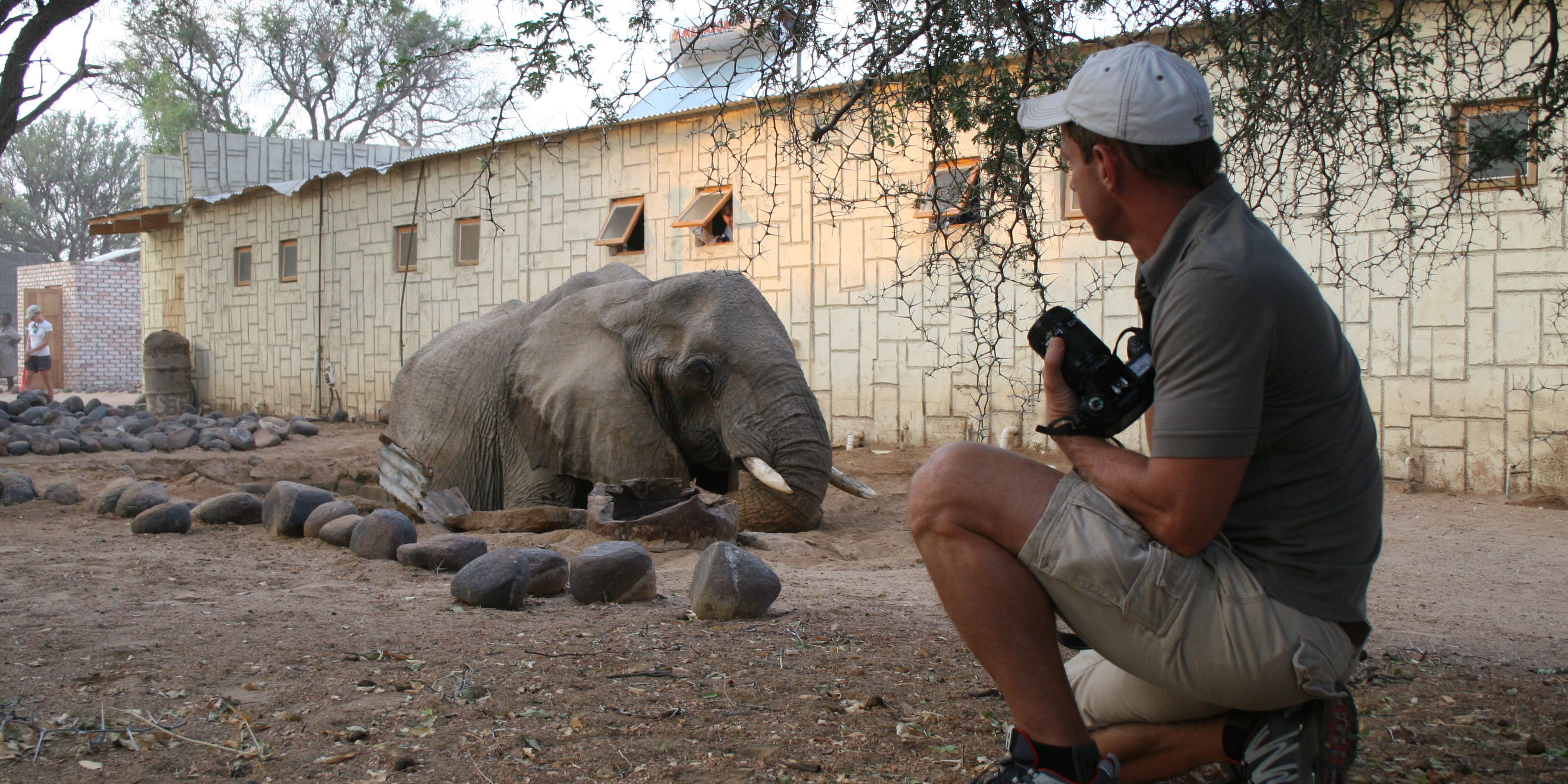 By way of background, the desert elephants of Namibia’s Kunene Region are a distinctive population that have adapted to life in an extremely arid environment. They are one of only two populations of “desert” elephants in the world (the other is in Mali, North Africa) and have a number of notable physical and behavioral differences. There has been some speculation that desert elephants are a separate subspecies, but the movement of bull elephants between savannah areas like Etosha and the desert suggests that there is sufficient genetic exchange that they are not a unique subspecies. Namibia’s desert elephants are however unusual in some of their learned behaviors (such as long-distance migration) that allows them to survive in this difficult environment.

We were camping in the Ugab river in Namibia when at midnight on Saturday I was woken by the sound of a trumpeting elephant, but thinking that it was probably a herd passing trough our camp, I didn’t pay any further notice. The next morning we were notified by one of the local people that a grown elephant cow was trapped in a sewerage hole. The slate of cement that covered the hole broke when she stepped on it and she fell into it. The hole was half filled with sewerage and she could not move in any direction as it was exactly the same size of her body. This happened just after midnight so by early morning she had been trapped for 8 hours.

The Namibian authorities were contacted to assist in any way to help save her but sending a crane to this remote part of Namibia was impossible and no helicopter was available. The authorities advised that the animal should be shot to help her out of her misery and the meat distributed among the local people. It is estimated that there are only 100 of these Desert Elephants left in the Damaraland/Kaokoveld part of Kunene Region of the Namib, of which approximately 18 are young bulls. Losing one of these magnificent animals, especially a cow, was not an option so we started our own rescue operation.

The swimming pool pump was used to first extract all the sewerage that she was standing in. This took some time as the pump stopped working a few times and we had to manoeuvre the pump between her legs. Eventually the hole was almost empty and then the long process to gradually fill the hole with rocks and sand started. Our plan was to fill it to a point where she would have been able to step with her feet on the rim of the hole to eventually climb out. She was a bit agitated in the beginning but then realized that we wanted to help and showed very little aggression. We constantly sprayed her with water as it was extremely hot. Every time we stopped to take a brief rest or closed the tap, she lifted her head as to say ”keep going”. Throwing the round rocks into the pit needed some good aiming as not to injure her legs. After 6 hours of hard work the moment finally arrived where she could lift her two front legs on the edge of the hole. After a process of trying and resting she eventually managed to get out of the hole where she was trapped for more than 12 hours. She stood there for another few hours as she was extremely tired but almost seemed to realize what we did to help her and felt totally safe in our company. She later left to search for her family members up in the river. Thanks for taking the pictures Christine.