Lapped by the Indian Ocean, straddling the equator, and with Mount Kenya rising above a magnificent landscape of forested hills, patchwork farms and wooded savanna, Kenya is a richly rewarding place to travel. The country’s dramatic geography has resulted in a great range of natural habitats, harboring a huge variety of wildlife, while its history of migration and conquest has brought about a fascinating social panorama, which includes the Swahili city-states of the coast and the Maasai of the Rift Valley.

Kenya’s world-famous national parks, tribal peoples and superb beaches lend the country an exotic image with magnetic appeal. Treating it as a succession of tourist sights, however, is not always the most stimulating way to experience it. Once off the beaten track, one can enter the world inhabited by most Kenyans: a ceaselessly active scene of muddy farm tracks, corrugated-iron huts, tea shops and lodging houses, crammed buses and streets with wandering goats and children. Both on and off the tourist routes, you’ll find warmth and openness and an abundance of superb scenery – rolling savanna dotted with Maasai herds and wild animals, high Kikuyu moorlands grazed by cattle and sheep, and dense forests full of monkeys and birdsong.

Some ideas of adventures to Kenya…

As with all the itineraries on our website, the following are just a few examples of what is possible. After liaising with you, we will plan your obligation free itinerary, taking your unique individual needs and budget into consideration. You need only to contact us today to start planning your dream adventure to Africa.

From the breathtakingly beautiful setting of the Ngorongoro crater to the Serengeti, famed for its annual migration when some six million hooves pound the open plains, this adventure ends with four days in the Seychelles where lush palms and tropical forests bloom and glorious white beaches abound.

Area : Kenya is a country in East Africa with coastline on the Indian Ocean. It encompasses savannah, lakelands, the dramatic Great Rift Valley, mountain highlands and abundant wildlife such as lions, elephants and rhinos. From Nairobi, the capital, safaris visit the Maasai Mara reserve, known for its annual wildebeest migrations, and Amboseli National Park, offering views of Tanzania’s 5,895m Mt. Kilimanjaro.

Climate : There are two dominant influences on the climate in Kenya: the onshore monsoon winds from the Indian Ocean, and the altitude. The winds determine the onset of Kenya’s two rainy seasons, with the hot northeast monsoon or kaskazi blowing dry air in from the Persian Gulf from November to March/April and the warm, moist kusi monsoon blowing in from the southeast from April/May to October. It’s the slightly cooler kusi that normally delivers the heaviest rain, a season known as the ‘long rains’, in late-April, May and early June. The relatively cool season, from late-June to October, has much less rain.

There is a second rainy season (the ‘short rains’), for a few weeks in November and December, followed from about mid-December to March by a dry season of hot, usually rainless, weather.

Safari – between January and the end of March; the climate is mild, mostly dry and game viewing is at its peak.

Masai Mara wildebeest migration – between mid-August and late October when the herds have returned from their months in Tanzania’s Serengeti.

Getting to Kenya : These airports service numerous international carriers including the national airline Kenya Airways. Kenya has good connections to destinations throughout Europe, the Asia- Pacific region, USA and Africa.

Masai Mara : One of the world’s most magnificent game reserves. Bordering Tanzania, the Mara is the northern extension of the Serengeti and forms a wildlife corridor between the two countries. It’s named after the statuesque, red-cloaked Maasai people who live in the park and graze their animals here as they have done for centuries. The park is famous for the Great Migration when thousands of wildebeest, zebra and Thomson’s gazelle travel to and from the Serengeti, from July through October.

Malindi : North of Mombasa on the Kenyan coast, Malindi is a beach resort popular with European visitors. Thanks to its rich trading history, it too is a melting pot of cultures and cuisines. Part historic old town, part modern tourist hub, Malindi is where travelers come to bask in the sun on the white sands of Watamu Beach, dive the coral reefs of the Malindi and Watamu Marine National Parks, and soak up a dose of Swahili history in the historic town, dating from the 12th century.

Lamu Archipelago : The small island of Lamu, northeast of Mombasa, oozes old world charm. A UNESCO World Heritage Site, Lamu Old Town is Kenya’s oldest continuing inhabited settlement with origins dating back to the 12th century. Visiting here is like stepping back in time. Dhows plow the harbor, few (if any) motorized vehicles exist here, and donkeys still rule the streets as they have done for centuries.

Amboseli National Park : Crowned by Mount Kilimanjaro, Africa’s highest peak, Amboseli National Reserve is one of Kenya’s most popular tourist parks. The name “Amboseli” comes from a Maasai word meaning “salty dust”, an apt description of the park’s parched conditions. The reserve is one of the best places in Africa to view large herds of elephants up close.

Mount Kenya & Central Highlands : Formed by a series of volcanic eruptions, Mount Kenya is actually comprised of three glacier-cloaked peaks. The highest is Batian, although Nelion, the next highest, is a tougher climb. The lowest peak, Lenana, is considered the easiest climb, although unpredictable weather can pose challenges.

Lake Nakuru National Park : This lake in Central Kenya, is famous for its huge flocks of pink flamingoes. The birds throng on Lake Nakuru itself, one of the Rift Valley soda lakes which comprises almost a third of the park’s area. Lions, leopards, warthogs, waterbucks, pythons, and white rhinos are just some of the animals visitors might see, and the landscapes range from sweeping grasslands bordering the lake to rocky cliffs and woodland.

Samburu, Buffalo Springs, and Shaba National Reserves : On the banks of the palm-lined Ewaso Nyiro River, Samburu, Buffalo Springs, and Shaba Reserves lie in an arid region in the remote north of Kenya. Shaba National Reserve is one of two areas where George and Joy Adamson raised Elsa the lioness, made famous in the film “Born Free”. The wildlife in all three reserves depends on the waters of the river to survive, and many species are specially adapted to the parched conditions such as Grevy’s zebras, Somali ostriches, and gerenuks, the long-necked antelope that stand on two rear legs to reach the fresh shoots on upper tree limbs.

Lake Naivasha : A haven for birders, Lake Naivasha lies at the highest point of the Great Rift Valley and has been known to shrink considerably in times of extreme drought. A flourishing floriculture industry in the area is also impacting water levels and quality. One of the best ways to view the wildlife is by boat. More than 400 species of birds have been spotted here, including African fish eagles. Hippos slosh in the water, and giraffes, zebra, buffalo, and eland graze around the edges of the lake. 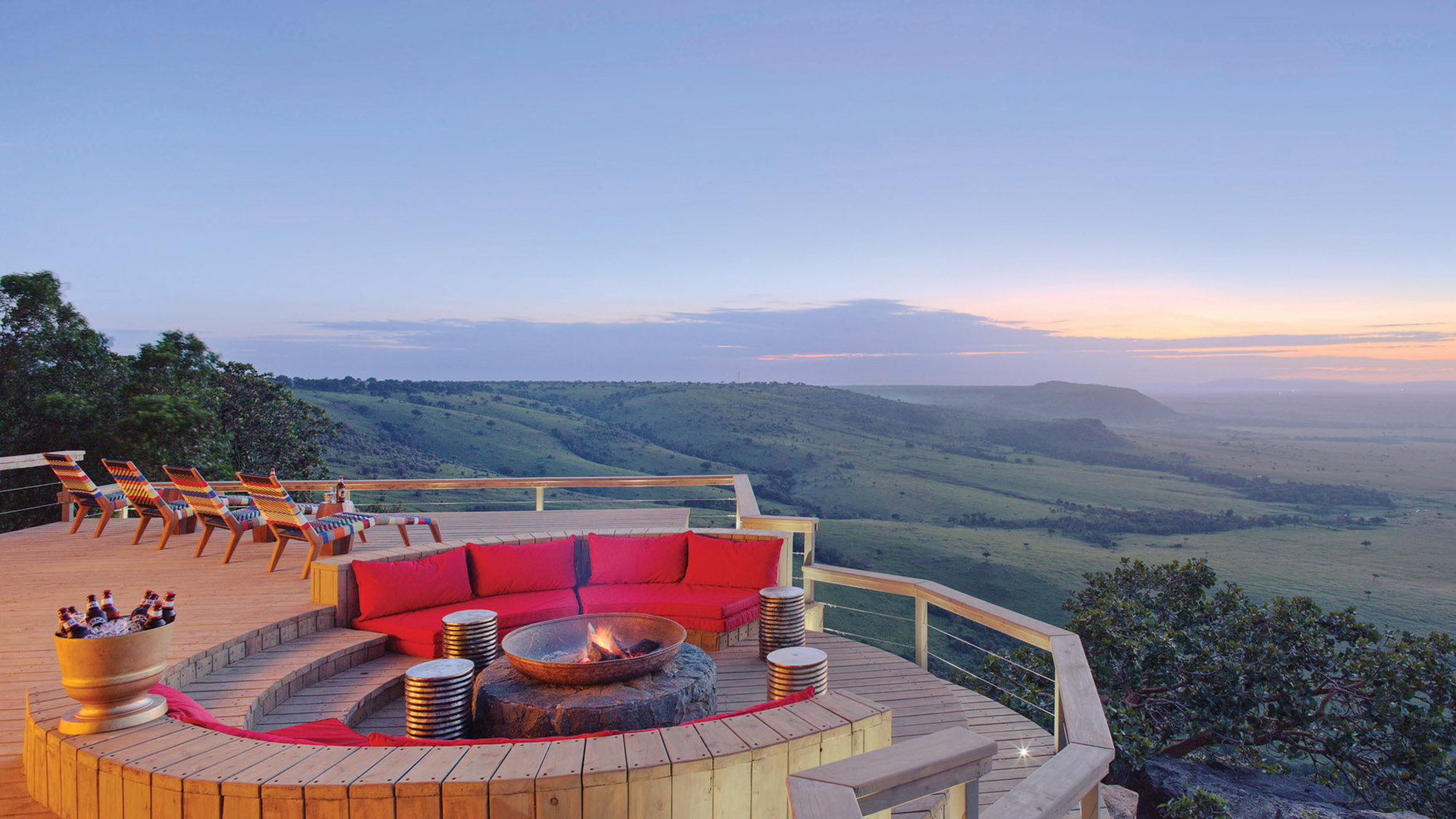