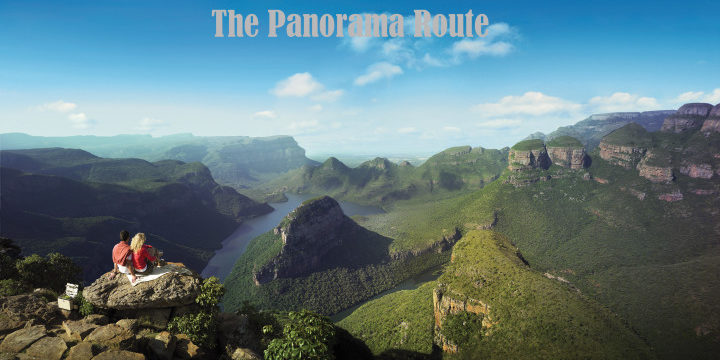 The Panorama Route is a scenic road in South Africa connecting several cultural and natural points of interest. This route, steeped in the history of South Africa, is situated in the Mpumalanga province. The route is centered around the Blyde River Canyon, the world’s third-largest canyon, and features numerous waterfalls, one of the largest afforested areas in South Africa, and several natural landmarks. The route starts at the foot of the Long Tom Pass (the highest tarred road in the country) just outside Lydenburg, following the natural descent from the Great Escarpment to the Lowveld, and ending at the border of the Mpumalanga and Limpopo provinces near the Echo Caves.

Blyde means “glad” or “happy” in old Dutch, a name derived from a voortrekkers’ expedition.

The Blyde River Canyon may be the largest ‘green canyon’ due to its lush subtropical foliage. It has some of the deepest precipitous cliffs of any canyon on the planet. It is the second-largest canyon in Africa (third largest on earth), after the Fish River Canyon, and is known as one of the great wonders of nature on the continent.

A visit to this magical landscape promises sightings of diverse plant life, birds, and all five of South Africa’s primates. The somango monkey, nocturnal greater and lesser bushbabies, chacma baboons, and vervet monkeys can all be seen. Meanwhile, in the surrounding rivers and wetlands of Swadini Dam, hippos and crocodiles abound with waterbirds and otters making the occasional appearance. 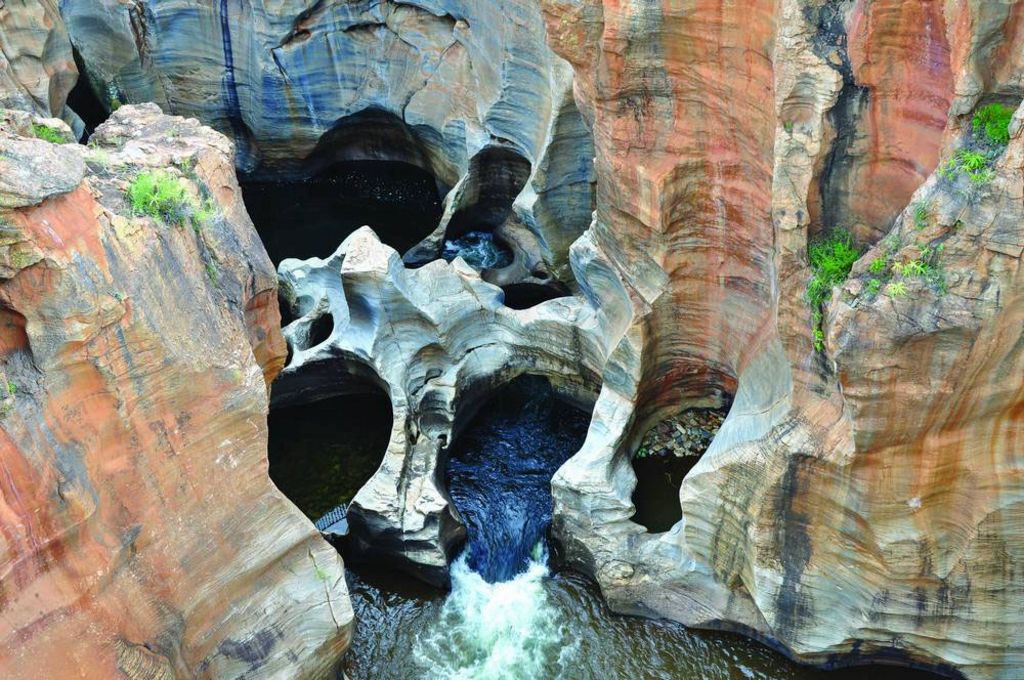 Bourke’s Luck Potholes is a series of rock formations found where the Blyde River meets the Treur River. These bizarre swirl holes were developed over thousands of years, when the once rapid river flow carried masses of sand and debris, causing waterborne sand and rock to grind huge, cylindrical potholes into the bedrock of the river, forming a series of dark pools.

The Potholes were named after a gold digger, Tom Burke, who staked a claim nearby.  Although his claim did not produce a single ounce of gold, he correctly predicted that large gold deposits would be found in the area. 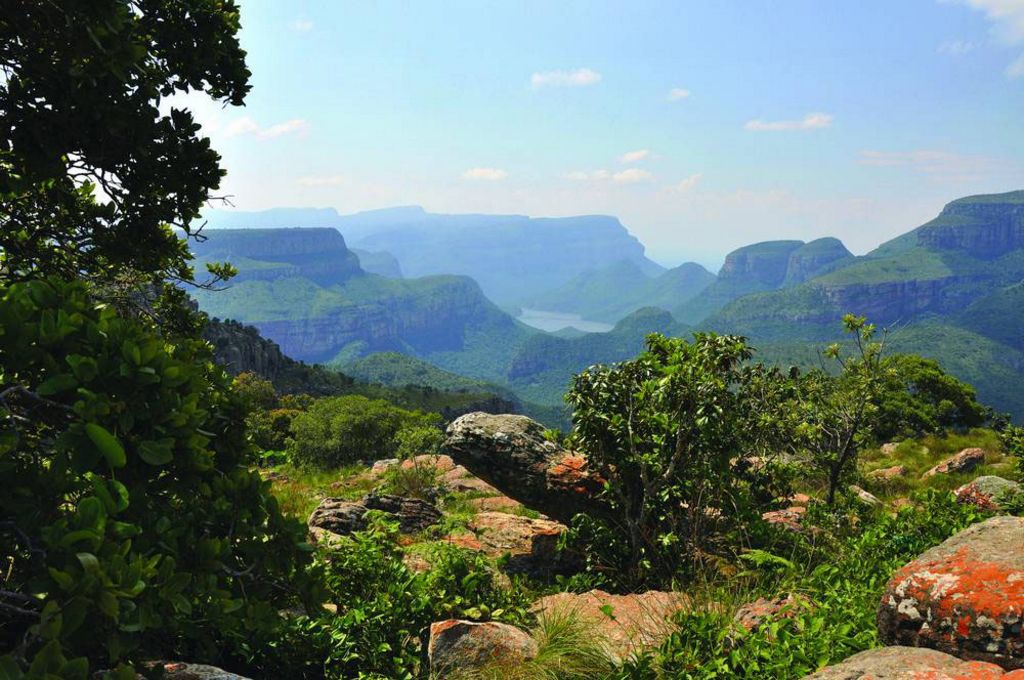 With magnificent views, canyons, rock formations and waterfalls, God’s Window is truly an area of breathtaking scenic splendour. It is no wonder that Mpumalanga is known as Paradise Country.

Gods Window is so-called for the panoramic view of the Lowveld more than 900 m down into lush indigenous forest-clad ravine. The majestic cliffs plunge over 700 meters to the Lowveld and the private game reserves which have made the area one of South Africa’s main wildlife destinations. God’s Window is a small part of a 250km long earthwork of sheer cliffs and extravagant beauty. One can observe the hills and forests as far as the eye can see.

A steep stepped footpath leads to the viewpoints along the edge of the escarpment. There are three viewing sites and picnic areas along the way. A boardwalk leads through a peaceful rainforest with moss-covered trees, little streams, and boulders of all shapes and sizes all the way to the top. 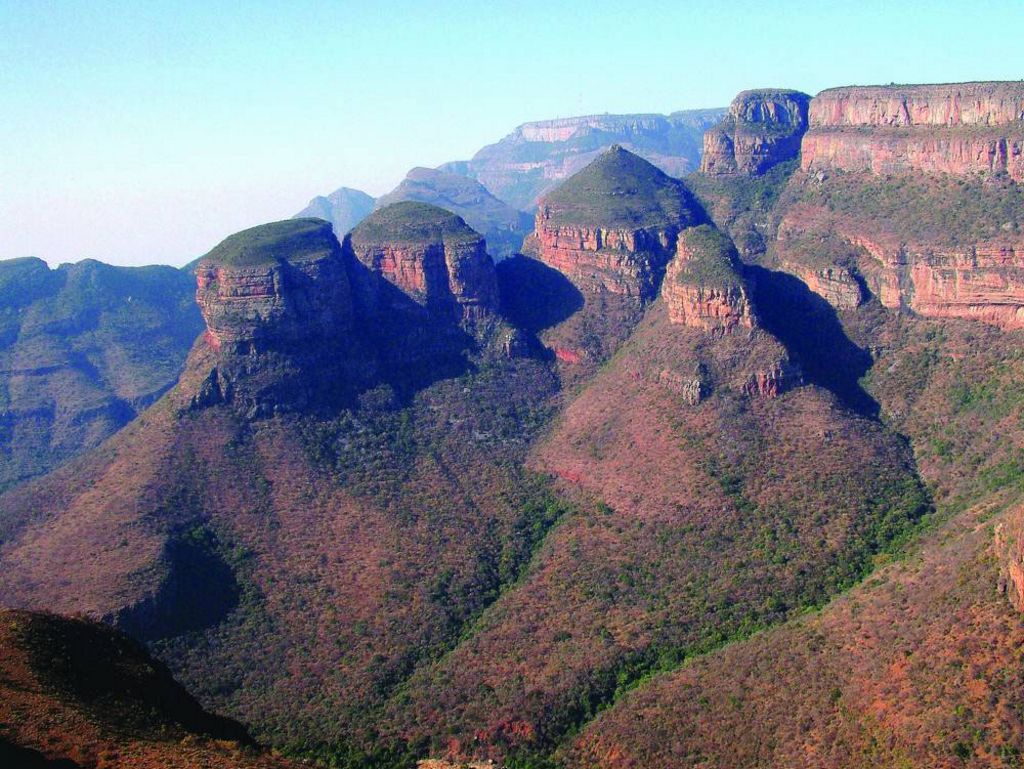 Exactly as they sound, the Three Rondavels are three round mountain tops with slightly pointed tops, very similar to the traditional round or oval African homesteads made with local materials called rondavels. The shapes are due to erosion of softer limestone, leaving harder quartzite behind.

The Bapedi knew these formations as the Chief and his three wives. The flat-topped peak was named Mapjaneng (‘the chief’) after a legendary Bapedi chief, Maripi Mashile, defeated invading Swazis in a great battle near here. The three peaks are named after his three troublesome wives – Magabolie, Mogoladikwe, and Maseroto.

The viewpoint is spectacular. From here one looks over the canyon to the Three Rondavels on the other side of the northern edges of the Drakensberg range of mountains. An outlook that is overwhelmingly beautiful and deserves more than a moment’s respite. 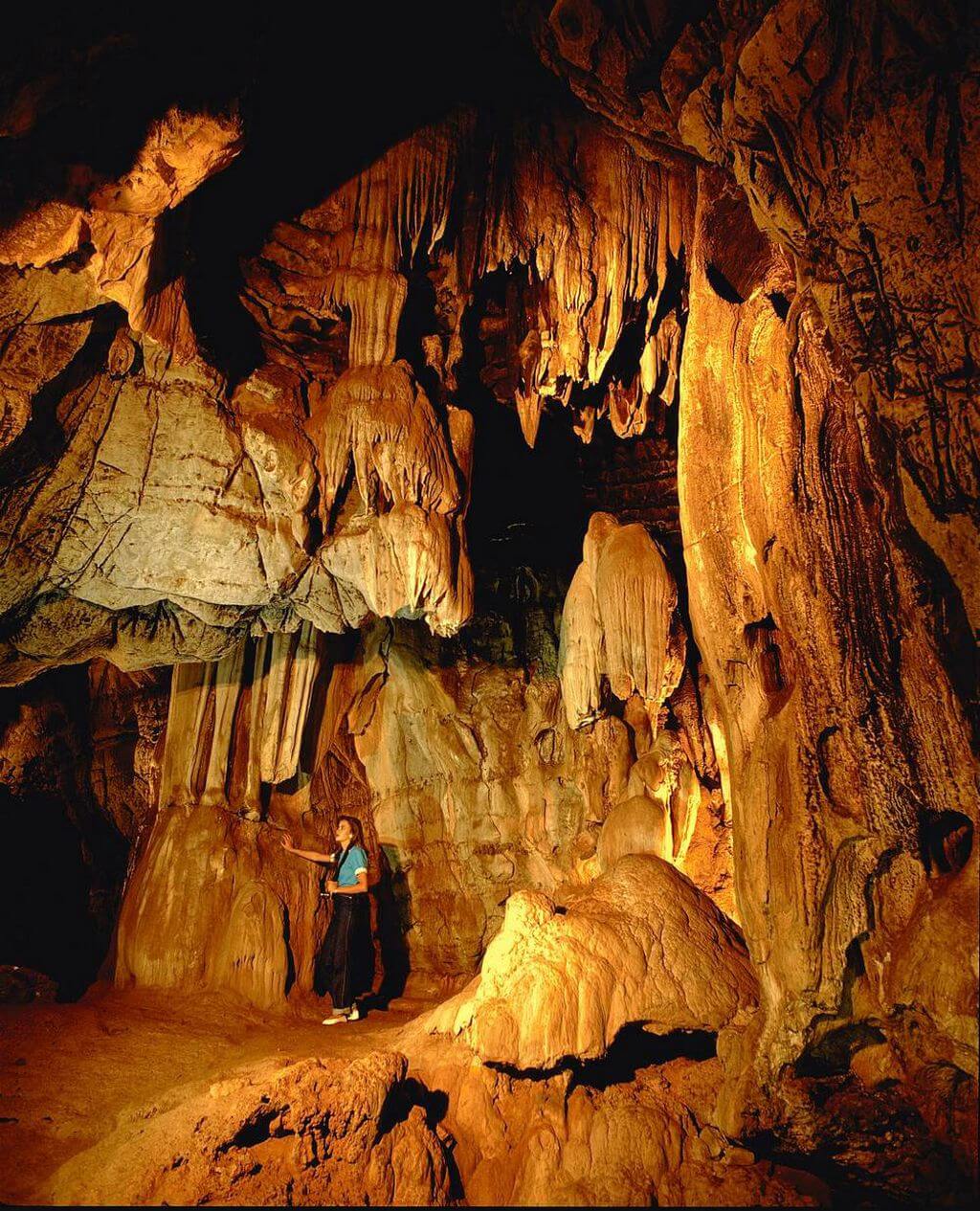 The Echo Caves are set in Precambrian dolomite rock, which was first laid down about 3800 million years ago, when Africa was still part of Gondwana. The caves are considered some of the oldest in the world.

In the nineteenth century, the Pedi lived in the Echo Caves. They used the hollow stalactites as a warning system to warn their people of attacks by neighboring Swazi tribes. Many archeological artefacts and bones from those times are on display at the nearby Museum of Man.

In 1923, the caves were rediscovered by the owner of the farm Klipfonteinhoek, near Ohrigstad, who was looking for missing cattle. The caves were opened in 1959 as a tourist attraction. In the 1980s, more sealed caverns were discovered, and entrances created both into the existing caves and out to the hillside; the new discovery included the enormous Madonna chamber.

The Echo caves were opened as a tourist attraction in 1959 and have been declared a National Monument. They can be uncovered via guided tours through 2 km of tunnels. 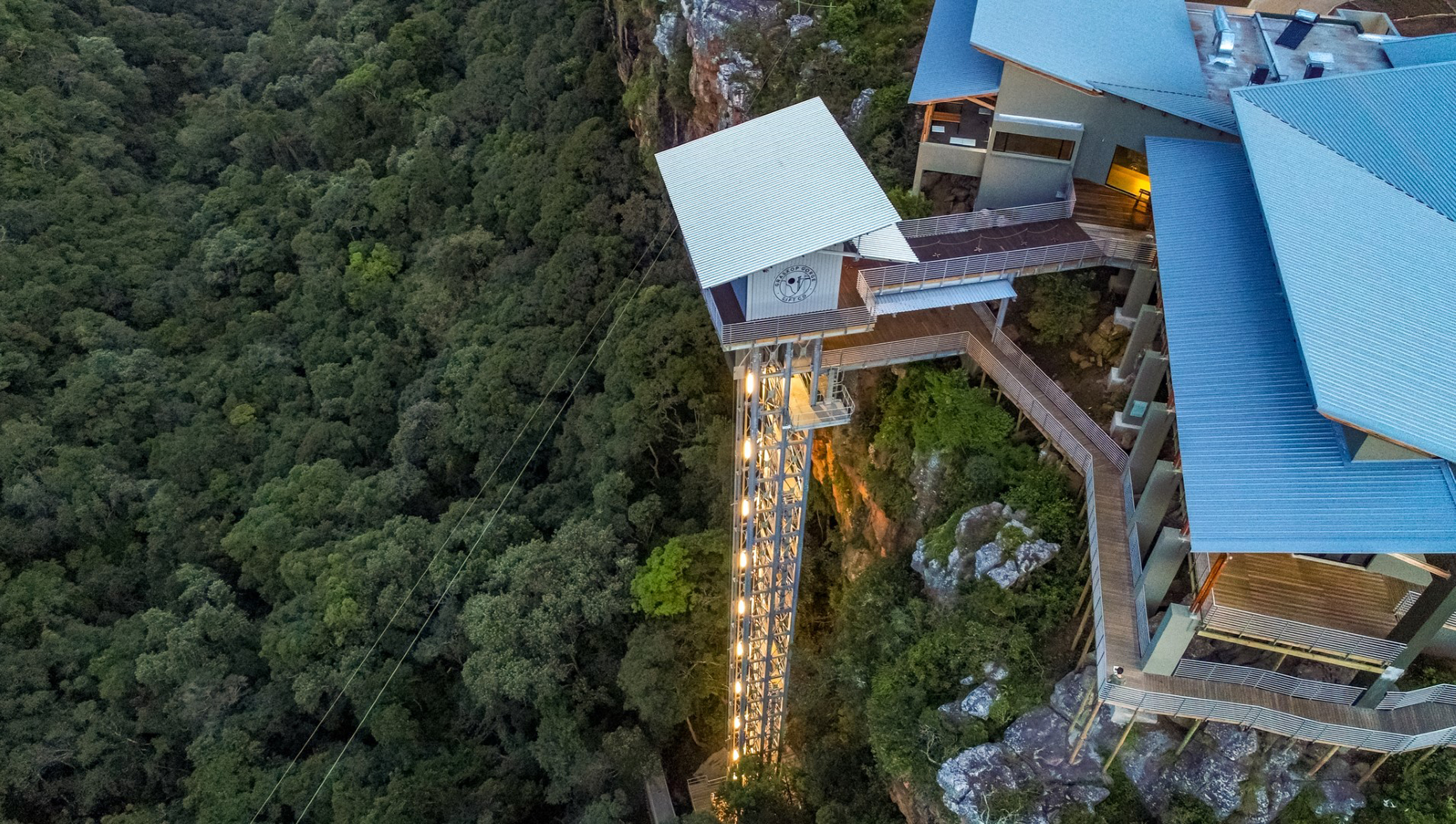 The viewing lift takes visitors 51 metres down the face of the gorge into the forest below, where wooden walkways & suspension bridges meander along a 600 metre trail through the indigenous forest with interactive exhibits.

* 240 tons of concrete in the foundation
* 88 tons of steel in the shaft
* Lift was manufactured by Otis
* The distance from the base to the top of the shaft is 60m
* The total travel distance in the lift is 51m
* The lift travels at 1m/s and takes one minute to go down.
* Only the front of the lift is glass from waist height upwards

The Panorama Route in Mpumalanga is also known for its steep cliffs from where impressive waterfalls run over this last edge of the Drakensberg escarpment. The area has a high summer rainfall of up to 190mm per month, which ensures that this part of South Africa has the best waterfalls in Southern Africa. 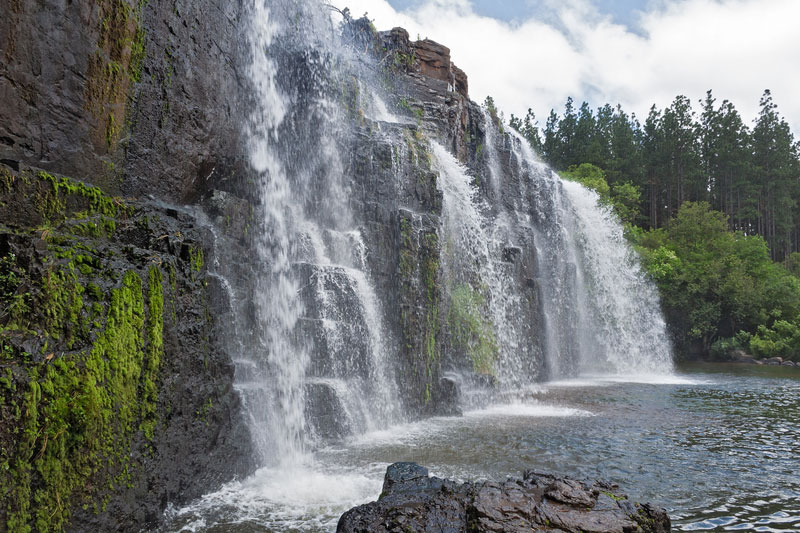 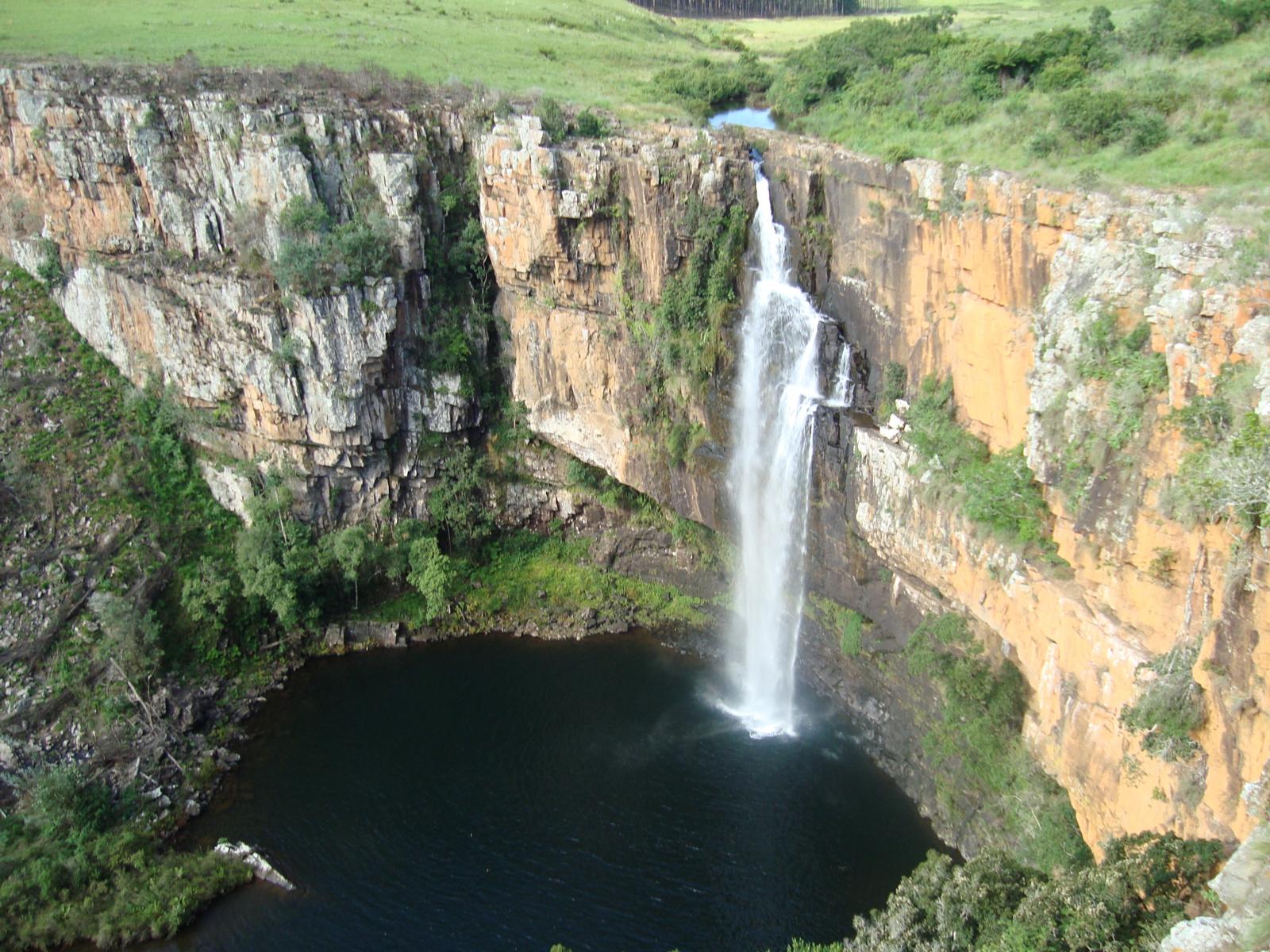