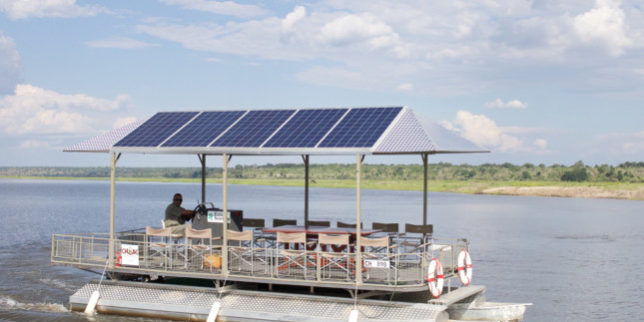 In October 2015 Botswana’s first solar powered boat was launched on the Chobe River by Chobe Game Lodge.  Another major innovation in the safari industry in Africa.

In the few months since its launch the solar boat has saved approximately 1,600kg of CO2 emissions and with the addition of the two solar boats currently in production, the entire fleet of five vessels will be all-electric.

Chobe Game Lodge’s conversion to solar powered and electric safari boats is very much in keeping with Botswana Tourism Organisation’s (BTO) commitment to ecotourism.   In recognition of the need to protect the natural resources of Botswana, BTO has adopted one of the world’s strictest eco-grading systems. 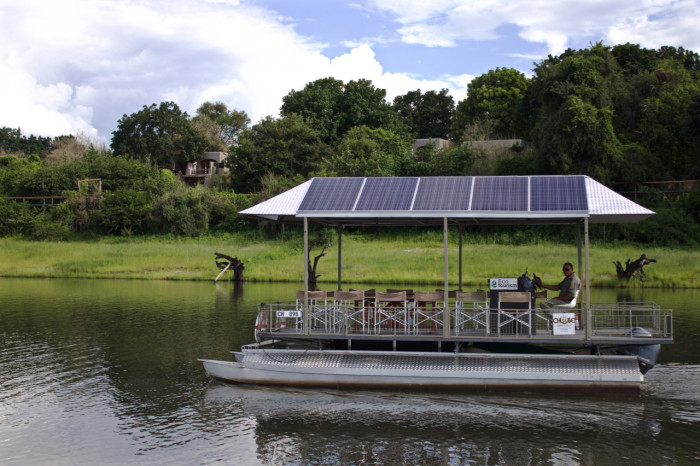 Chobe Game Lodge already has top-level ecotourism certification but continues to improve.   Installation of solar panels on all roofs in the staff and maintenance area is in the planning stages for 2017.   Power generated by these panels will be used to re-charge the batteries of what will be a full fleet of electric game-drive vehicles, safari boats and mitigate general lodge power consumption.

The conversion to electric powered boats is certainly a winner for the environment but it is also a big plus for the safari experience.   Noise and vibrations are reduced to an absolute minimum so guests are able to appreciate the tranquillity of the beautiful Chobe River.

The fourth electric vehicle (EV) arrives in March 2016 and the introduction of these EV’s has been extremely successful so far. Guests on safari are thrilled by the sheer quietness of the experience with the wildlife and nature while on safari in Chobe.

Wildlife photographers are amazed by how much better the EB’s and EV’s are in assisting them. Moving in relative silence helps tremendously in getting in the right spot at the right time. Without disturbing the wildlife and minimising movement and vibrations while photographing is a huge help.

Since the inception of the first EV and EB in November 2014 their feasibility is showing results in the figures. Chobe Game Lodge have saved over BWP 60,000 in fuel and further savings on maintenance and workshop costs.

The savings in fuel translates to a total of about 30 tones of CO2 emissions that would have otherwise been released into the atmosphere. Not to mention the cleaner, quieter and kinder impact the electric powered boats and vehicles have on the environment of the Chobe National Park.

There are a lot of question marks about the high cost of electric-powered vehicle and boats.  The capital investment in the conversion to electric powered boats is significant but the results show that the investment pays dividends immediately.

Based on the savings on running costs of the solar boats (electricity & fuel) the return on investment is in the region of 33%. A wise investment given the uncertain fuel prices and questionable access to affordable or reliable electricity in Southern Africa.

Above all though, the environmental benefit is without question. We will encourage other operators and authorities to consider the benefits of creating a regulated safari region where only electric boats may operate – a world-class destination of silent, clean and wildlife friendly safari boats.

Botswana prides itself as the superior safari destination in Africa. And the nation is also considered as one of the most forward thinking countries on the continent. Exemplary conservation projects, tightly-controlled tourism development and a growing economy supported by a world-class diamond industry – and of course the enduring and stable democracy all add to a successful past and bright future.

At Chobe Game Lodge we are proud to be part of the great country that is Botswana and help lead the way with solar powered EB’s and EV’s.  We are extremely excited to continue to move forward with our ecotourism initiatives and encourage people to come and experience it for themselves!