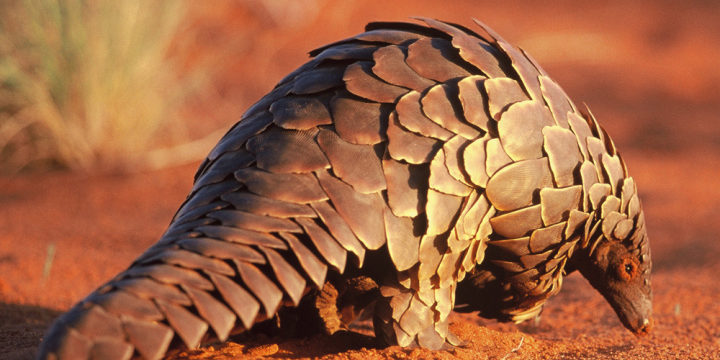 They are Prince William’s favourite and David Attenborough would take them on his ark, but what makes pangolins, the world’s most hunted creature, so special? 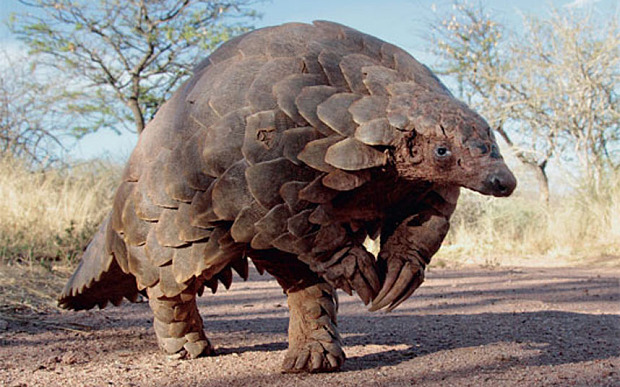 The prehistoric pangolin, which walks on its hind legs due to the length and curvature of its impressive claws. Photo: Judy Hurd

With its armoured shell and peculiar gait, the humble pangolin looks more like an anteater prepped for medieval battle than an animal under threat. Illegal trade in South Asia, however, has now rendered the scaly mammals the most trafficked animal on earth, with some estimates claiming that sales now account for up to 20 per cent of the entire wildlife black market.

In response to the pangolin’s plight, numerous campaigns have been launched to raise awareness, including the SavePangolins organisation and an app, Roll with the Pangolins, which was endorsed by Prince William in his role as President of United for Wildlife. What’s more, in 2012 Sir David Attenborough chose the Sunda pangolin, a species distributed throughout South East Asia, as one of his ten favourite species he would ‘save’ from extinction.

So what is it that makes pangolin so special, and why has nobody heard of them? Here are 12 facts to get you up to speed on one of the most threatened species on Earth.

1) There are eight species of pangolin

From one extant family, Manidae, there are eight species of pangolin still in existence worldwide, as well as several extinct species over their 80 million year evolution.

Four of the species are Asian: Chinese, Malayan (or Sunda), Indian and Palawan; while the others are African: Tree pangolin, Giant ground pangolin, Cape pangolin and Long-tailed pangolin.

2) A pangolin’s tongue can be longer than its body

When fully extended, a pangolin’s tongue can be over 40cm long, and starts deep in the chest cavity. Pangolin do not have teeth and are unable to chew, however, so use their sticky tongues to collect insects – up to 70 million a year – which are ground up by stones and keratinous spines inside their stomachs. 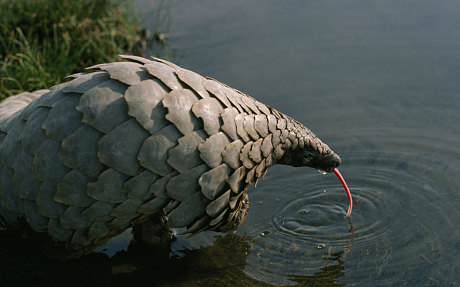 Among the pangolin’s astonishing features is its sticky long tongue – almost as long as its body – with which it picks up its daily intake of about 200,000 insects. PHOTO: Des and Jen Bartlett

The pangolin’s large scales are made of keratin, the same material of which our fingernails, rhino horns and bird talons are made – and account for 20% of its weight. The scales are very hard and protect pangolin against animal predators, yet in traditional Chinese medicine are dried and roasted as a method of relieving palsy, stimulating lactation and draining pus. As a result, pangolin scales can sell on the black market for over $3,000 a kilogram, and have even been used to make coats 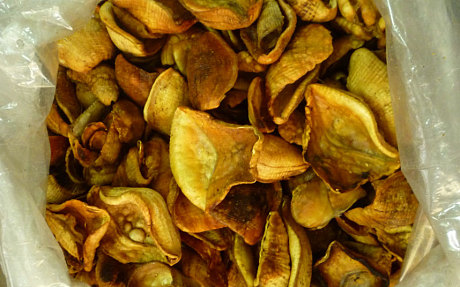 Pangolin scales are sold by the bag in Asia, where some believe they can cure everything from cancer to acne. PHOTO: Dan Challender

4) The name means ‘something that rolls up’

The ground pangolin got its common name from the Malay (the national language of Malaysia, Brunei and Indonesia) word ‘pengguling’, meaning ‘rolling up’, in reference to the animal’s defence mechanism of rolling into a tight, near-impenetrable ball when threatened. Unfortunately, this practice makes it even easier for humans to capture and smuggle them, as hunters can simply pick up.

5) Some climb trees, others dig holes

With their large, curved claws, pangolins are able both to grip on to overhanging tree branches and dig through concrete. Arboreal pangolins, such as the African long-tailed species, live in trees, while others dig burrows so large a human could stand up in them.

Aside from humans, pangolins’ main predators include lions, tigers and leopards. Often, though, rolling up in a ball is enough to outwit the big cats, as a pangolin’s keratin scales are too hard for even a lion to bite through.

7) Nobody knows how long they live

It is presumed that pangolins have a lifespan of twenty years in the wild, since the oldest recorded pangolin lived for 19 years in captivity. The creatures are very rarely found in zoos, however, as time spent in captivity tends to bring about stress, depression and malnutrition, leading to early death. As such, it is unknown how long a pangolin can live for.

When threatened, pangolins defend themselves by rolling up in a ball and, if needed, lashing out with their tale – the scales on which can easily cut a predator’s skin. In addition they are also able to emit a noxious-smelling acid from glands near the anus, similar to the that of a skunk, though pangolins are unable to spray the liquid. 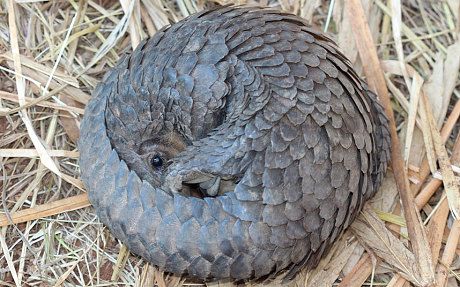 To protect itself, pangolins can roll up into a near-perfect ball, covering their faces and undersides, which aren’t as tough as their keratin scales. PHOTO: APWG, courtesy of Zoological Society of London

9) Millions have been traded and killed in the last decade

It is estimated that 100,000 pangolins are captured every year from across Africa and Asia, with most shipped to China and Vietnam, where their meat and scales are sold. As a result, all eight species of pangolin now feature on the International Union for the Conservation of Nature (IUCN) Red List of animals threatened with extinction.

10) Their eyesight is dreadful

Of the eight species of pangolin only one, the long-tailed pangolin native to west and central Africa, is regularly active during the day. The rest are nocturnal and, relative to their body size, have very small eyes. This means they have poor eyesight, instead locating termite mounds and ant hills with a strong sense of smell and hearing. 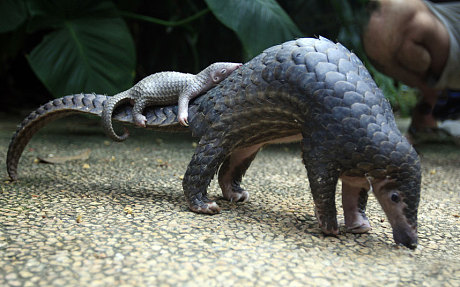 Pangolin pups are carried on their mother’s tail for three months, and remain with them for five months until they are strong enough to live alone. PHOTO: Associated Press

11) Dating can be difficult

Pangolins are sexually dimorphic, meaning the genders differ wildly in weight. Most male pangolins are up to 50 per cent heavier than females, while the Indian species can reach 90 per cent. There is no defined mating season, and pangolins are largely solitary aside from mating, so males attract the opposite gender by marking their territory with urine and waiting for a female to find them.

They may be prehistoric, but scientists have changed their minds over the taxonomy of pangolins. It was previously thought the mammals were a member of the Xenarthra family, which includes the similar-looking anteaters, sloths and armadillos. New evidence, however, has shown a closer relationship to the Carnivora, a diverse order containing hyenas, bears and wolves.

Other people are reading…