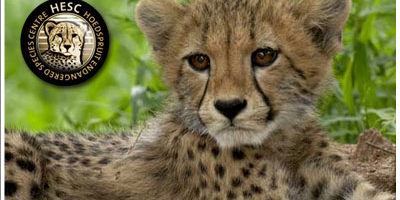 The Hoedspruit Endangered Species Centre is among South Africa’s best-respected animal sanctuaries. During your visit you will see creatures that are so rare that your chances of seeing them in the wild are vanishingly slim. Cheetahs are the reason the centre started, but you’ll love all the other animals too.

The Hoedspruit Endangered Species Centre started, as many animal sanctuaries do, because of one person’s love for animals. Lente Roode was this person.

In 1950 Lente Roode’s father, Willie Schamann, bought a 2000-hectare farm in the Hoedspruit district in the Northern Province of South Africa which today forms part of the Kapama Private Game Reserve (situated close to to the Kruger National Park in South Africa).

Lente’s father generated income by farming sheep and cattle. Lions, leopards and cheetah were seen as a dire threat to livestock and were shot on sight as a result.

It was during her childhood that Lente developed a love for animals, the African bushveld, and for the farm which she visited at every opportunity. This was the beginning of a life-long passion for conservation of the cheetah, and of all animal species.

As a child of six, Lente was given an orphaned cheetah cub after a neighboring farmer shot the mother. They called her Sebeka and she soon became part of the Scharmann household. Together, Lente and her mother (a nurse) lovingly cared for the animal. Lente and her cheetah were inseparable.

Once grown up and married, Lente established her cheetah sanctuary within Kapama Game Reserve, a massive piece of land that had once been a cattle farm. Later, more animals on the Red Data list arrived at the centre: African wild cats, ground hornbills and wild dogs. Then blue cranes and small-spotted cats (also known as black-footed cats).

From the earliest days in 1990, this sanctuary has been open to the public. The money raised from visitors helps fund the sanctuary, which in turn creates greater awareness of the plight of endangered animals.

The HESC is focused on education of learners, students and the general public in conservation and conservation activities; eco-tourism; the release and establishment of captive-bred Cheetahs back into the wild and the treatment and rehabilitation of wild animals including orphaned Rhino that are brought to the centre.

The Hoedspruit Endangered Species Centre has established itself as one of the leading private research and breeding facilities for endangered species in the country. Governed by a progressive and modern management approach, it concerns itself with the breeding and maintenance of several endangered indigenous wildlife species in Southern Africa. Other facilities include a Tea Garden, Curio Shop and Game Drives.