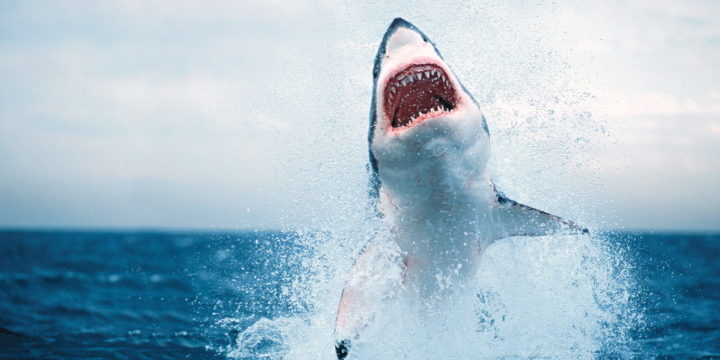 A recent paper published in Functional Ecology challenges the often assumed hunting strategy of great white sharks as ambush predators. This is the first white shark research paper to be published in the esteemed British journal. The work took place in Gansbaai – a coastal aggregation site known as the world capital for sighting the species in South Africa. The research was completed by a team of international researchers from the UK, SA, USA, and Germany.

Predators can choose to sit and wait, which is observed in crocodiles, or actively patrol for prey like a cheetah, either of which may impact the animal and the ecosystem they inhabit in different ways. Some species may even use both modes and switch between them.

The Great White shark (Carcharodon carcharias) is a well-documented ambush predator with much attention drawn to its spectacular ambushing of pinniped (seals) prey at the surface. However, like many top predators, white sharks may either remain in one location for prey or actively search by patrolling.

Biologist Alison Towner, “We wanted to understand the hunting behavior of Great White sharks so we deployed acoustic tags next to the dorsal fins of 15 white sharks, varying in size and sex. The sharks were actively tracked throughout all seasons at the scale of meters, from a small research vessel between 2010 and 2014. We then used powerful statistical modelling tools called hidden Markov models to analyze almost 500 hours of shark tracks.

This was the first time HMMs have been used to study shark movements and our analysis was able to identify when shark behaviour changed and in some cases, what caused these changes. We identified some of the factors that cause variability in movements and were able to quantify changing behavior, something not possible with previous analytical tools.”

Results from the study showed that white shark movements differed throughout the day and in their responses to chumming – a method of using fish oil to attract sharks to diving vessels in the area. We were actually able to discern differences between male and female movement behavior, with females less likely to display restricted movements than males.  We also recorded white sharks re-using the same movement tactics – pioneering evidence that these predators show individual preferences for particular hunting strategies.

As with land-based predators, different individuals exert various levels of pressure in an ecosystem, and may choose a variety of tactics to find and capture prey. This work provided fundamental evidence that white sharks will ambush fur seals whilst either actively patrolling or using the sit and wait strategy, demonstrating that they show more plasticity in their hunting tactics that previously assumed.

‘White shark behaviour ultimately creates different pressures on other trophic levels which is of particular concern in a complex and vulnerable marine system such as Dyer Island.” Says Towner.

This study was supported by the Dyer Island Conservation Trust and Marine Dynamics Shark Tours. Founder Wilfred Chivell: “It is known that chumming does not impact migratory behavior of white sharks, but less is known about the short term behavior when they visit regions along our coast. Studies are often limited to observations from anchored boats. This is one of the most comprehensive studies on natural behaviour of white sharks in Gansbaai. It shows they use a more costly swimming mode around cage diving boats yet after diving activities cease for the day, the sharks resumed their natural hunting state while in the area.”