1. The entire coastline of Namibia is protected as a National Park 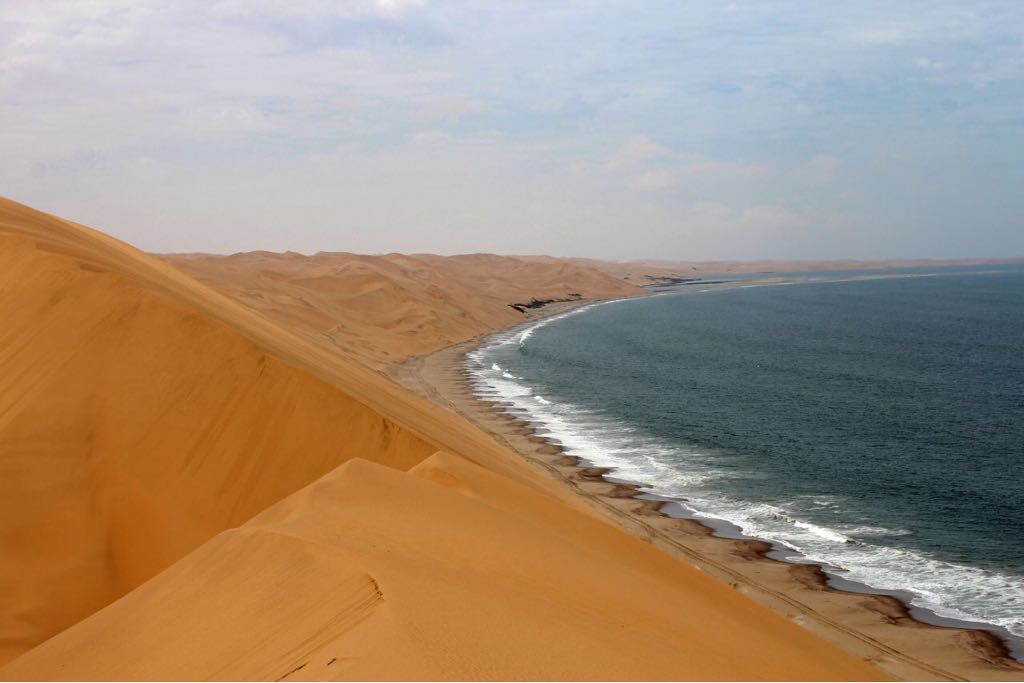 With the 2010 declaration of Dorob National Park, Namibia became the first and only country to have its entire coastline protected through a national parks network – the largest protected area in Africa. It was also the first African country to incorporate environmental protection into its constitution and more than 40% of our country is under conservation management.

2. The tallest elephants are found in Etosha National Park 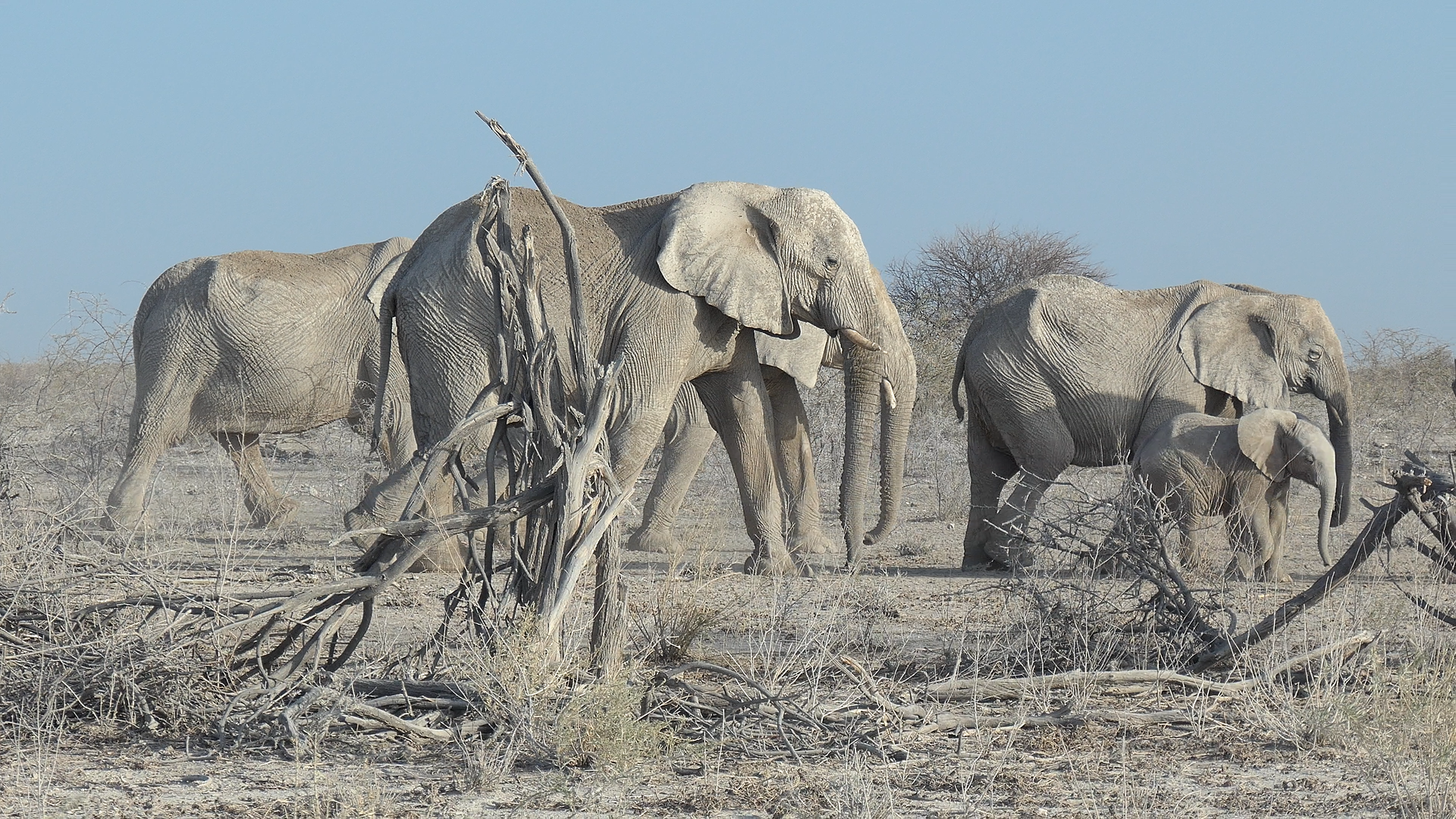 With their skin stained white by clay and calcite sand, these elephants look like ghosts haunting the sun-drenched savannah.

3. Namibia has the highest dunes in the world 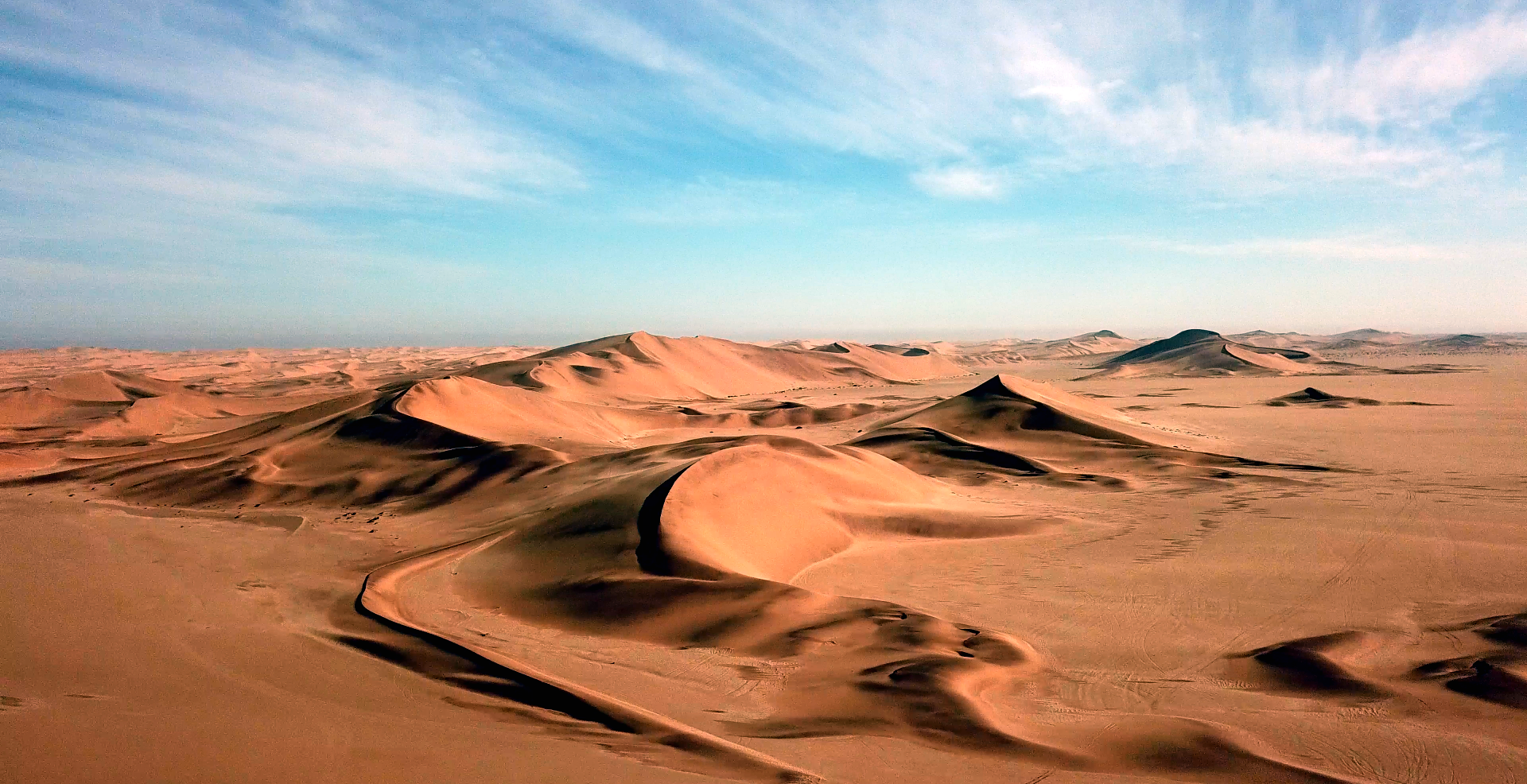 Big Daddy’ at Sossusvlei attracts thousands of climbers sitting at a height of 325 metres, but the highest sand dune in the world is the nearby 383 metre-tall Dune 7.

4. The San people are the oldest hunter-gatherers 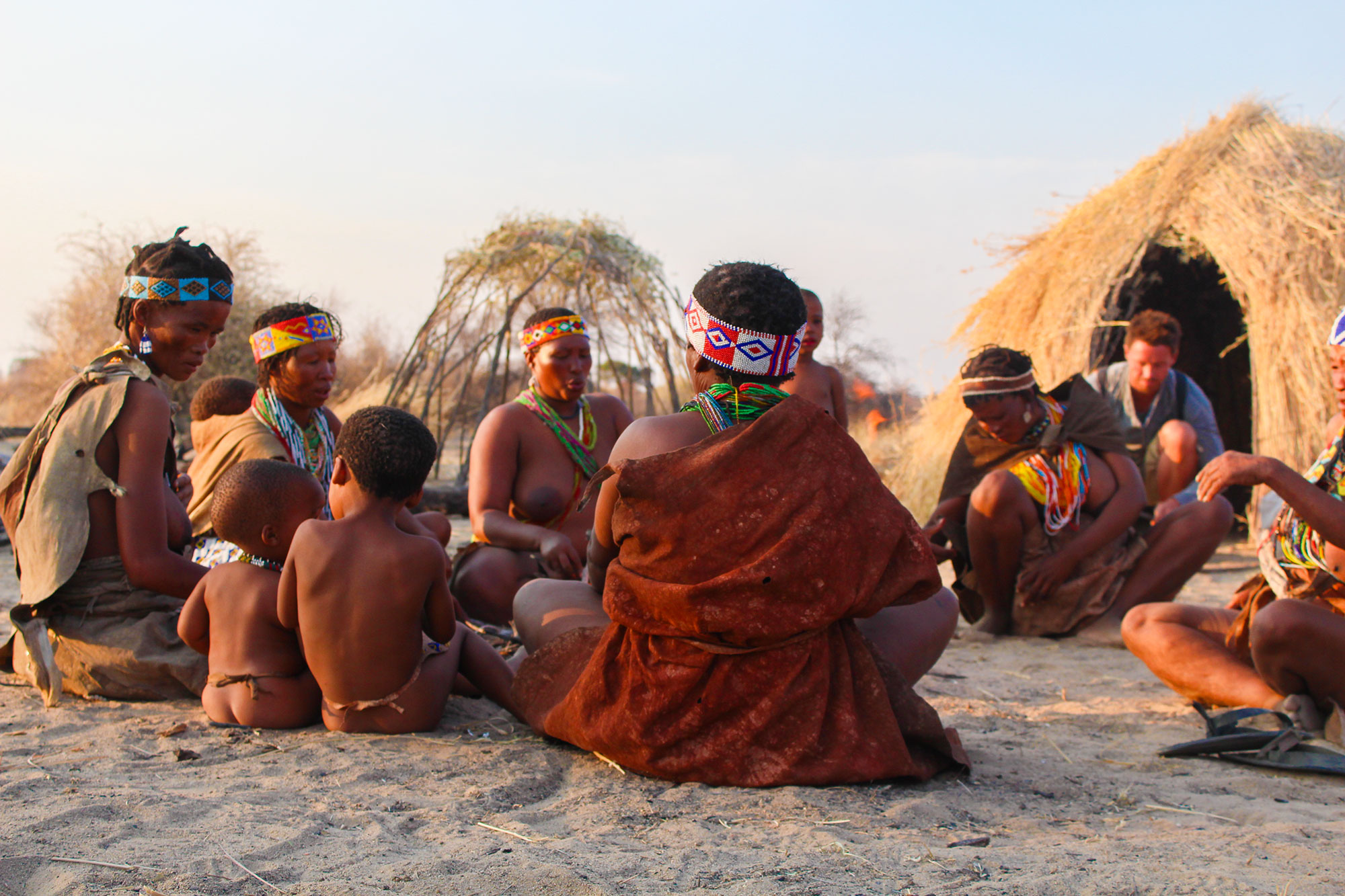 5. The largest quartz crystal is on display in Swakopmund 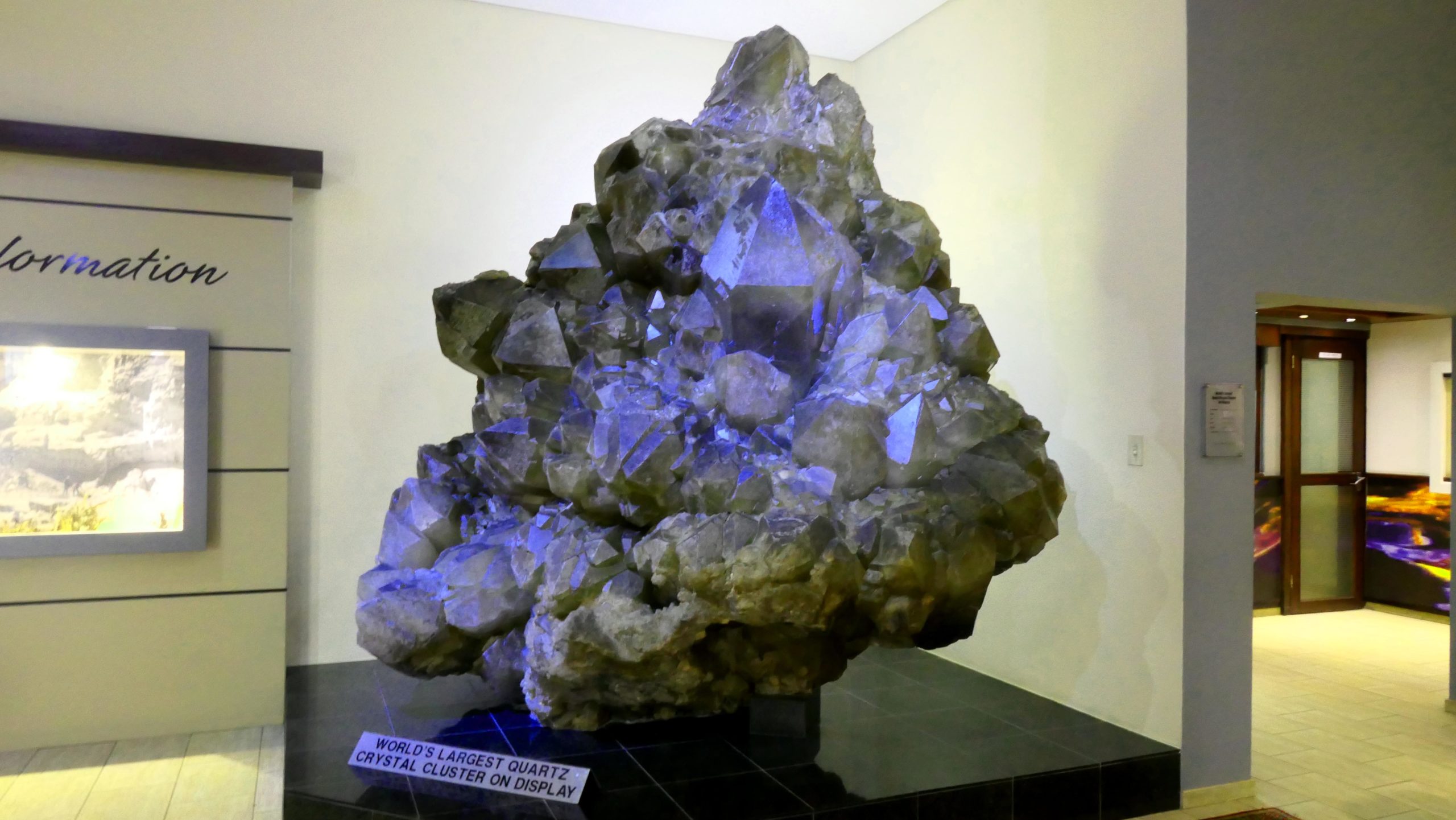 The largest crystal cluster was discovered in 1985 at the bottom of a 45 metre deep cave in the Otjua mine near Karibib in Namibia. It weighs 14,100 kg, 3m wide x 3m high, and took three years to excavate and remove.

6. The Fish River Canyon is the oldest and second-largest in the world 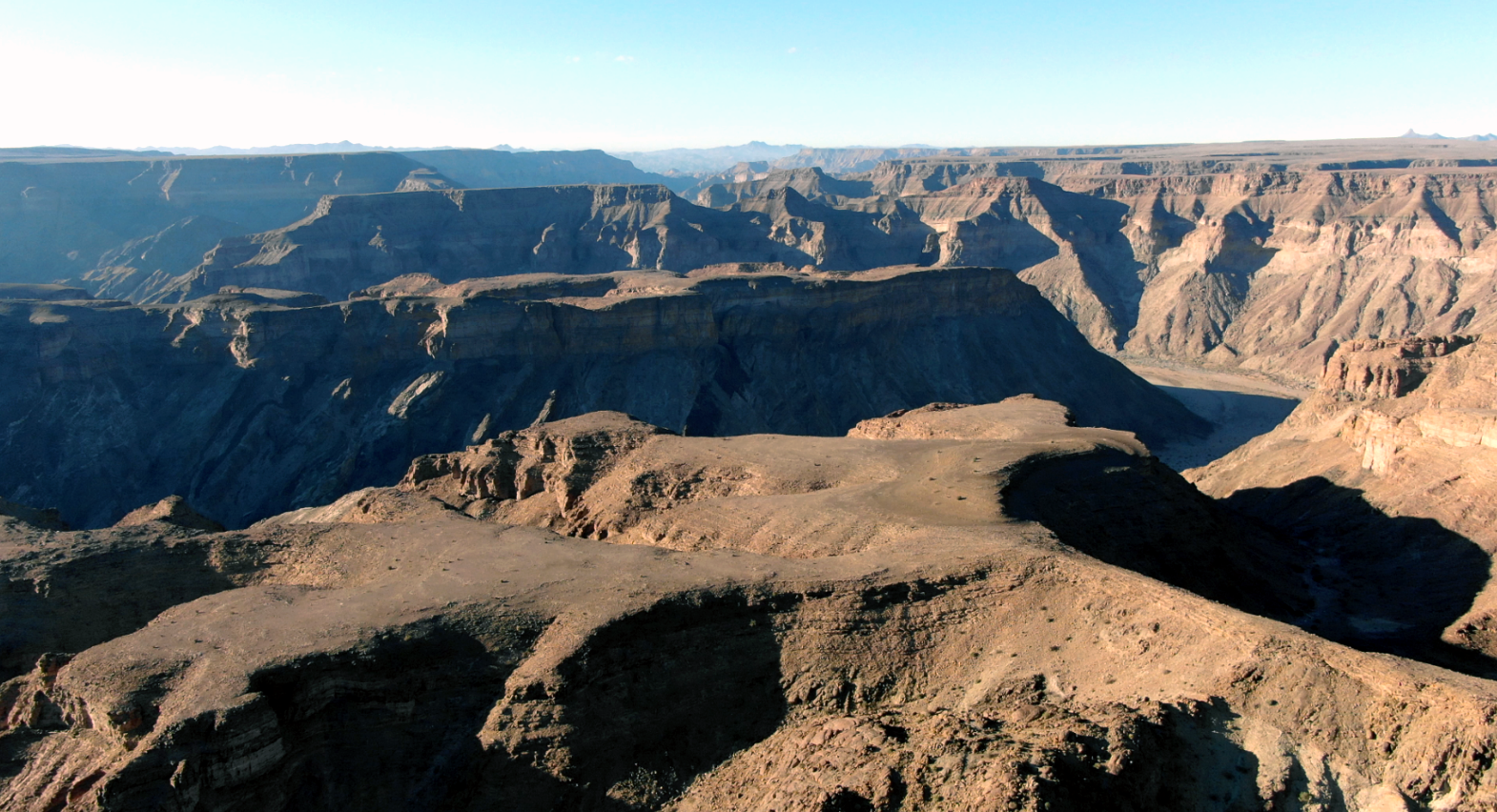 The canyon is over 500 million years old, with part of the strata formed as far back as 650 million years ago. At 160 km in length, it stretches across a whopping 5900 square kilometres, far more than the Grand Canyon.

7. Namibia has the biggest population of wild cheetahs and black rhino in the world

Ninety percent of Namibia’s estimated 2500 wild Cheetahs live outside of protected reserves, primarily on commercial livestock farmlands. Today’s wild cheetah population is estimated at 7100 adults and adolescents, a 90% reduction from a century ago. Namibia has 20% of the world’s remaining wild cheetahs. In the last 100 years, the world has lost 90% of the wild cheetah population. Today, one-third of wild cheetahs live in southern Africa. CCF is working across Africa to save the species throughout its range.

8. The Skeleton Coast is the biggest gravesite in the world 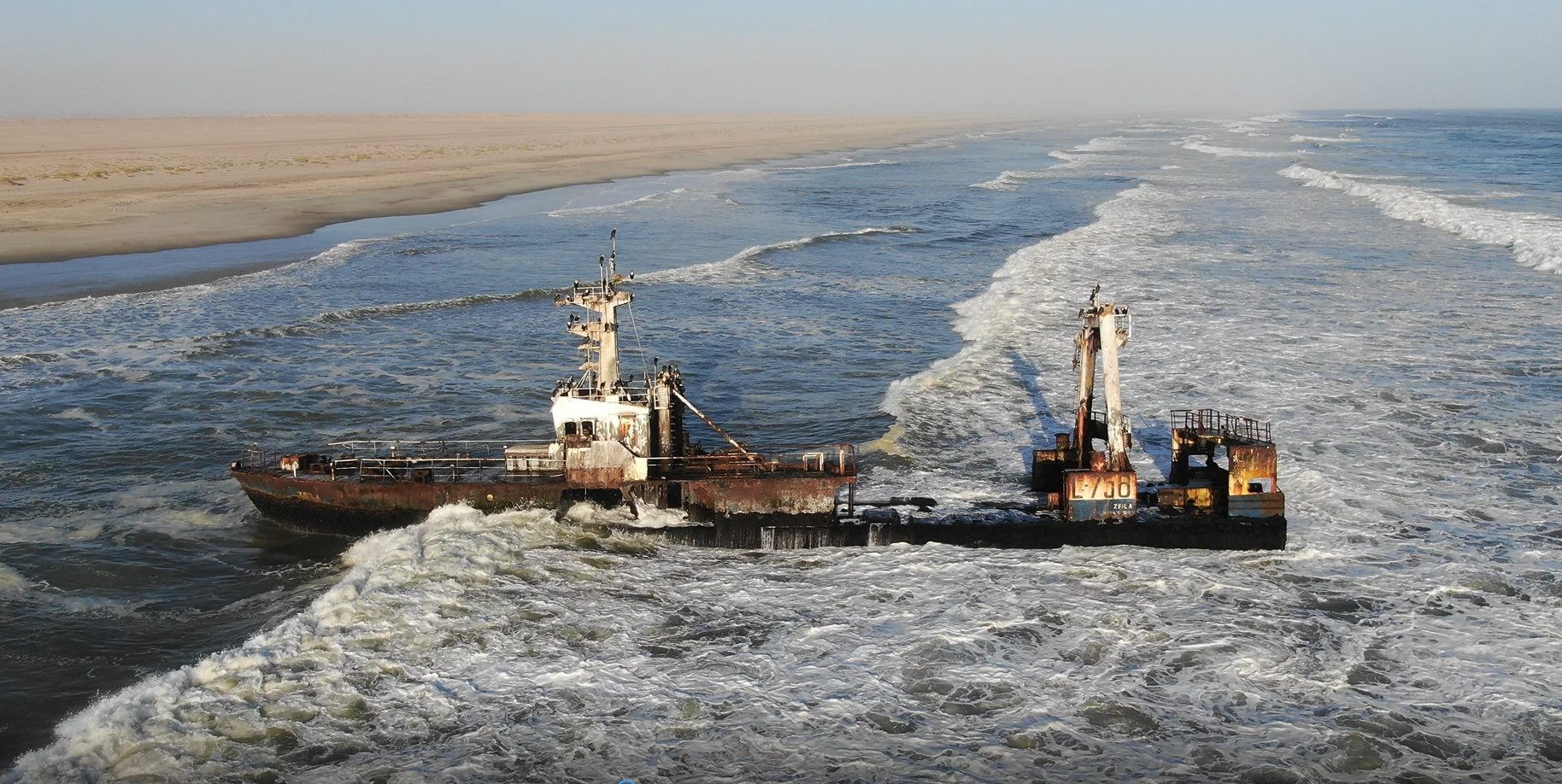 More than a thousand shipwrecks linger on the coast, ghosts of their former selves.

9. The fastest windsurfing in the world is happening at Luderitz, Namibia 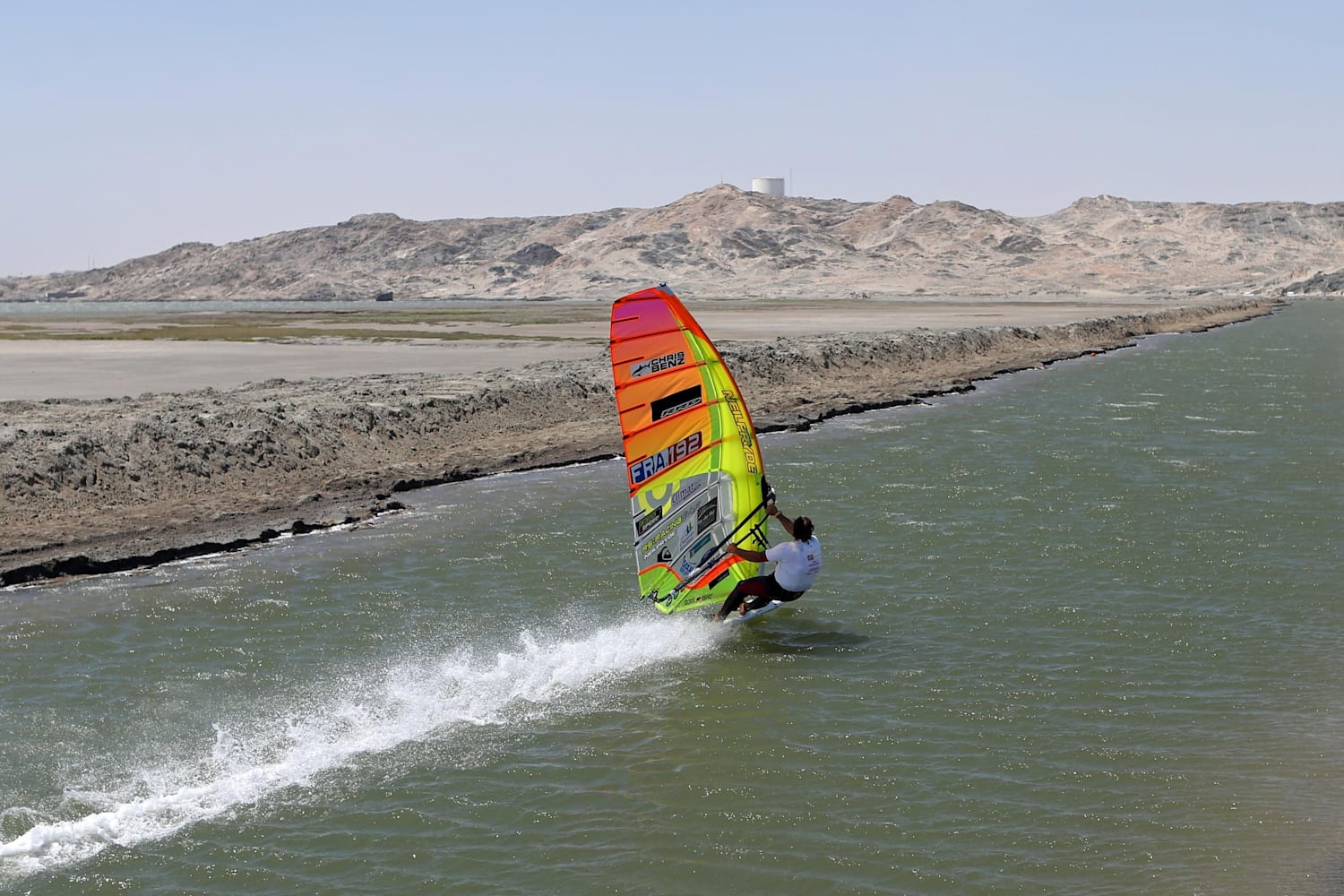 10. The Hoba Meteorite is the largest to be found on planet earth 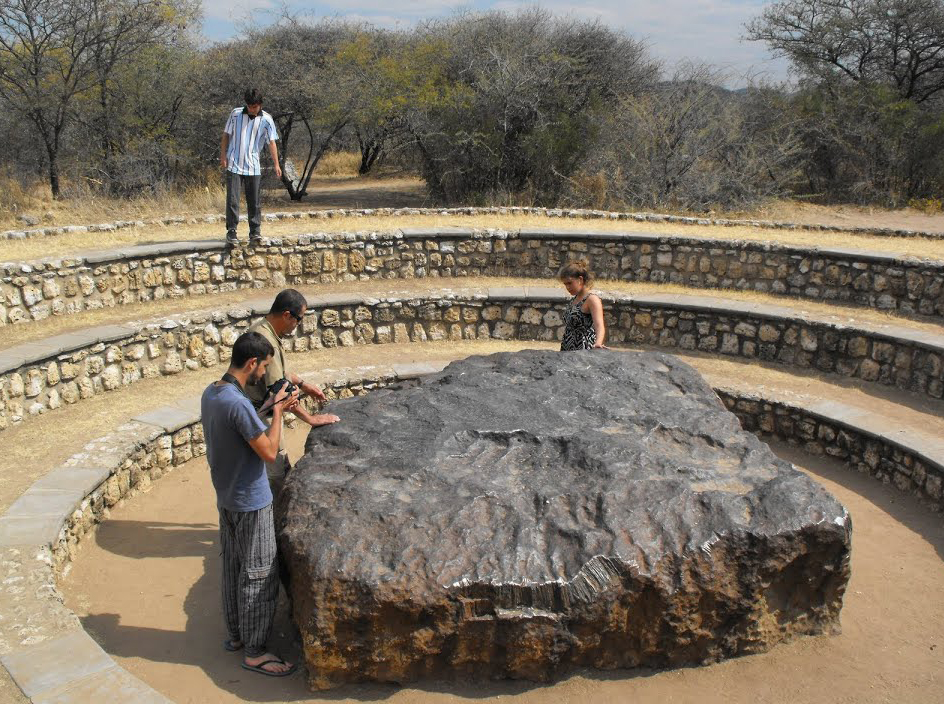 The Hoba meteorite weighs about 66 tons and is nine feet long by nine feet wide by three feet thick. Namibia is also the place where the world’s most extensive meteorite shower can be found. The Gibeon meteorite shower occurred in prehistoric times in central Namibia. It covered an elliptical area of 275 by 100 km. Remains from this meteorite shower are exhibited at Windhoek, Namibia’s capital city.

11. Namibia has the second-lowest population density in the world

12. Namibia is the first country in the world to incorporate environmental protection into its constitution

The result of this has been many community-based tourism initiatives that provide social and monetary benefits to the communities and an authentic experience for visitors. It’s sustainable tourism at its best!

13. Did you know that there are two different styles of sandboarding and Namibia offer both? 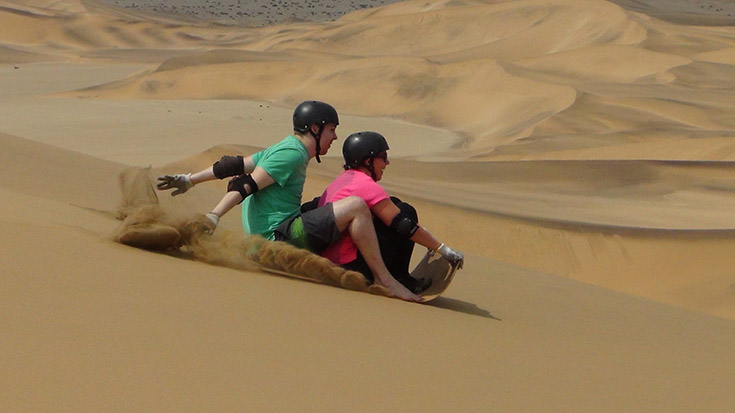 The easiest, but perhaps scariest is lying down and heading down the dune headfirst.  You can reach speeds of up to 80km/hr! The second is standing up, which is slower, but more difficult to master.

14. The largest underwater lake can be found in Namibia 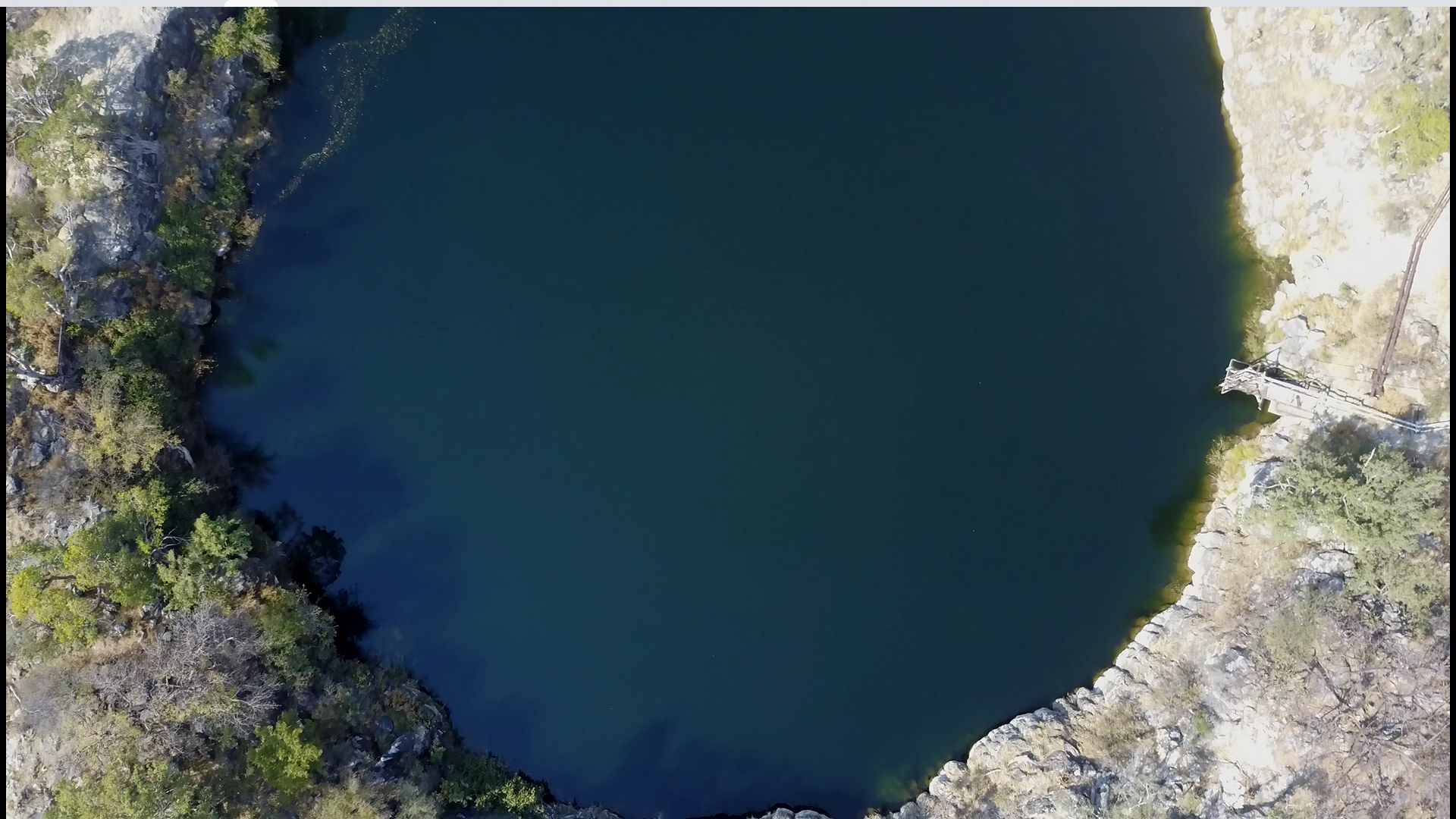 Dubbed Dragon’s Breath Cave – on account of the humid air that rises from its entrance – this gargantuan grotto is home to the largest non-subglacial lake in the world. Discovered in 1986, the cave can, alas, only be explored by professionals because of its treacherous topography.

15. There’s an intriguing story behind the country’s shape 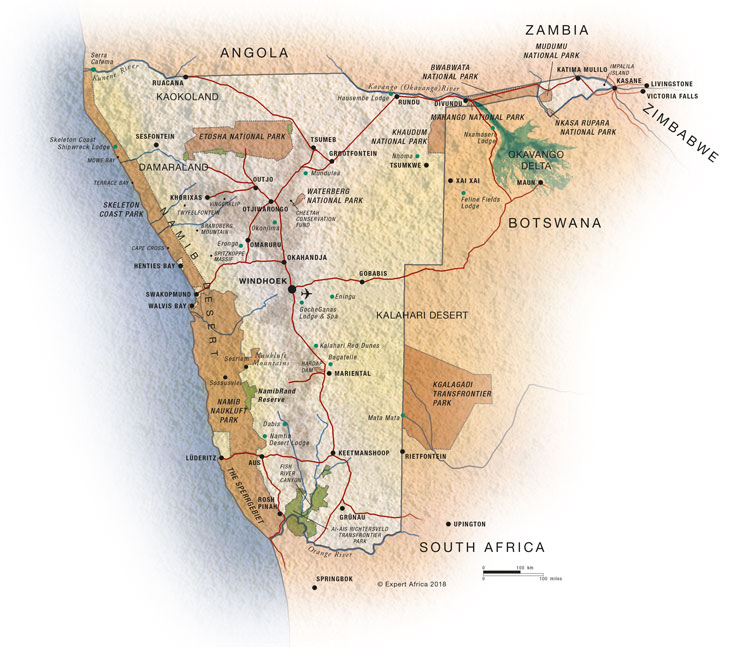 It was once a German colony and when the United Kingdom and Germany were carving up southern Africa they struck a deal: the former would give the latter what’s now known as the Caprivi Strip, in exchange for land elsewhere. The Germans accepted, believing the panhandle would give them access to the Zambezi River and a route to Africa’s east coast. There was just one problem, the world’s largest waterfall, Victoria Falls, lay in the way.  Not a great deal for the Germans in the end.

16. The German-inspired dresses of the local Herero people 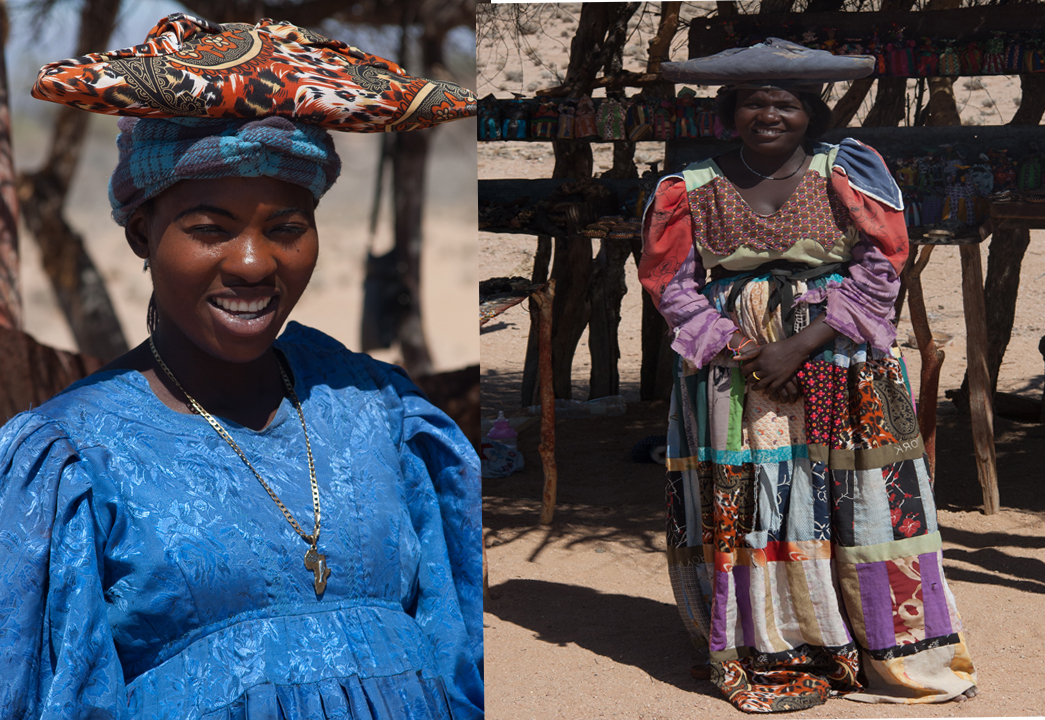 The style of dress was introduced by the German wives of missionaries and colonialists who first came to the country in the early 1900s. Before their arrival, most Herero were bare-breasted and wore front and back leather aprons, made from sheep, goat, or game skins. Today it reflects a strong sense of history and the memory of national rebuilding after the [Herero-German] 1904 war. It also provides a sense of cultural identity in general, in the historical context and in the context of modern-day Namibia.

17. Namibia is a favorite Hollywood location

Namibia is a favorite getaway for Hollywood royals and British royalty alike and many well known Hollywood films like Mad Max Fury Road, Flight of the Phoenix, and A Space Odyssey was filmed on location in Namibia.

18. Namibia is one of only 2 countries that have desert-adapted elephants 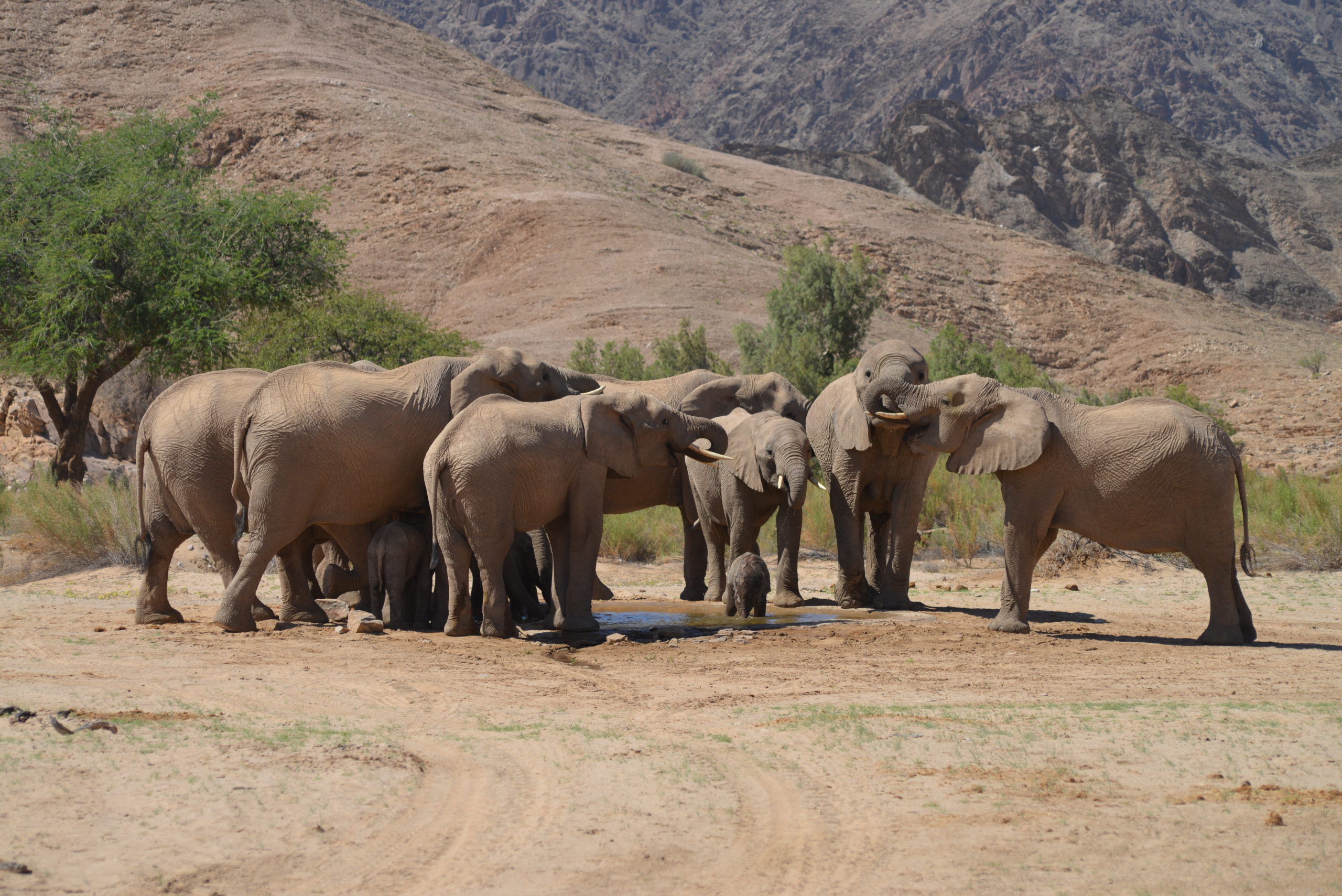 These elephants are very similar to the African bush elephant, but are a bit smaller with larger feet and longer legs than their savannah dwelling cousins.

19. Despite its low population, Namibia is home to 13 ethnic groups

One of these groups is the Himba of Koakoland. They’re a nomadic and traditional people whose ways have changed little over the years due to their seclusion from outside influences.

20. For sun lovers there are more than 300 days of sunshine

With 300 days of sunshine on average per year, Namibia is truly a sunny place. Only during the summer months from November to February does rain occur, mostly as heavy thunderstorms. Then the usually dry riverbeds become saturated with torrents of muddy water in a very short time. It is during this time that the sun-scorched land comes to life and develops a colourful horizon to horizon floral carpet within a few days. The interior enjoys two rainy seasons: the short season is between October and December, marked by frequent thunderstorms. The longer season is from mid-January to April.