Mozambique is emerging on the tourism scene for its exotic and wild beauty. Offering an unique historical and cultural heritage, tropical beaches, coral reefs, spectacular landscapes, intriguingly rich architecture and small desolate islands close to the coast, Mozambique is one of the most enticing tourist destinations in Southern Africa. Some 1,500 miles of rugged, creamy coastline are met by world-class coral reefs, primed for swimming, snorkeling, and sunset sailing.

Mozambique’s distinct local style consists of a vibrant blend of African, Arab and Portuguese influences and provides a refreshing contrast to the other countries in the Southern Africa region. True African culture immerses the senses in the Art Deco capital, Maputo, while luxury awaits within the string of exclusive private islands. The passion for life can be seen on every corner of this diverse country, from Maputo’s modern, bustling city streets and pulsating night life to the colourful markets and small fishing villages which dot the coast.

All our adventures to Mozambique include properties that have been inspected by us to ensure that your accommodation meet our standards. Speak to an ESA consultant who will advise you on this beautiful undiscovered part of Southern Africa.

Area : Mozambique is a southern African nation and its long Indian Ocean coastline is dotted with popular beaches like Tofo, as well as offshore marine parks. In the Quirimbas Archipelago, a 250km stretch of coral islands, the mangrove-covered Ibo Island has colonial-era ruins. It’s also a diving and snorkeling destination, as is Bazaruto Archipelago farther south, with reefs protecting rare marine life including dugongs.

Climate : Mozambique Climate is warm and tropical with an average temperature of 28° Celsius. The weather along the coast of Mozambique is sunny and warm even in midwinter, which is chilling elsewhere. The summer ranges from October to April and can be rainy, humid, and very hot.

Mozambique can experience occasional cyclones in February or March.

Getting to Mozambique : Once you’ve arrived at the coast, travelling onwards to the islands themselves means a boat, light aircraft or helicopter transfer. The islands are small enough to get around on foot though there are plenty of opportunities for sailing and boating trips. Mozambique is not a self-drive destination and travelers who want to explore its inland regions should arrange a guided safari.

Bazaruto Islands : – The Bazaruto Archipelago is a protected National Park. The protected reefs and beaches support dolphin, dugong, game-fish, giant lobster and several species of marine turtle. The Bazaruto Archipelago consists of a group of five islands along the historical Mozambican channel and opposite Vilanculos on the mainland; Bazaruto, Benguerra, Maraque, Banque and Santa Carolina. The area offers an idyllic unspoiled tropical island setting for your vacation. The islands are pristine and somewhat undeveloped, offering unbelievable natural beauty. World famous for its big game fishing, Bazaruto is also well known as a popular diving destination, with a rich variety of marine life surrounding the island.

The Bazaruto Marine National Park offers coral reefs, crystal-clear waters and diverse underwater life. Reef sharks, dolphins, manta rays and even turtles are regular visitors to these waters, and the turtles lay their eggs on the beaches of the island. Humpback whales can be seen between August and October, and whale sharks between April and July. Tourist facilities, upmarket lodges and exclusive resorts dot the island and are geared towards luxury tourism. Bazaruto is accessible by boat or plane from Vilanculos.

Benguerra Island : – Benguerra is the second largest island of the Bazaruto Archipelago, less than half a mile (1km) south of Bazaruto, and like its neighbour, boasts stunning beaches, large sand dunes and freshwater lakes. Its forest and wetland areas attract a huge variety of birds and animals, while its surrounding reefs offer some of the best diving and snorkeling opportunities on the African continent. Accessible by boat or plane from Vilanculos, there is plenty of accommodation on the island and tourist facilities are good, with a number of upmarket lodges and exclusive resorts geared towards luxury tourism. Benguerra is a popular honeymoon destination and remains an unspoiled natural paradise, which is fast becoming one of the best luxury beach destinations in Africa.

Cahora Bassa Lake : – Situated in the Tete Province of Mozambique, Cahora Bassa is one of Africa’s largest artificial lakes. One of three major dams on the Zambezi river system, along with Kariba and Itezhi-Tezhi, the Cahora Bassa Dam powers the largest hydroelectric scheme in southern Africa. Great fishing is the dam’s biggest drawcard and fishing trips are very popular, as the vast stretch of water contains a huge variety of fish, including tigerfish, sharptooth catfish, vundu, bream, longfin eels, and Zambezi parrotfish. Other attractions in the area include boat cruises and waterskiing. The lake and surrounding landscapes are very picturesque, with lush vegetation and dramatic mountainous scenery. There is a large population of hippos in the dam and majestic Baobab trees can be found on the southern shores, while the area’s rich birdlife will enthral bird enthusiasts. Sunset cruises and boat tours down the beautiful gorges of the dam are a must for travelers in the region.

Gorongosa National Park : – Often referred to as ‘the place where Noah parked his Ark’, Gorongosa National Park was a popular tourist destination for the rich and famous back in the 1960s, when the area’s abundant wildlife attracted stars like John Wayne, Joan Crawford, and Gregory Peck. The subsequent years of war and poaching decimated the wildlife count, but programmes have since been implemented to restore the park to its previous status as one of the richest wildlife refuges in the world.
The park contains a variety of terrain but is dominated by savanna and grassland, alongside some woodland and impressive limestone gorges. With lush rainforest covering her slopes, the park now includes the verdant Mount Gorongosa, source of the life-sustaining rivers that traverse the reserve. The mountain is sacred to locals and features prominently in traditional folklore.
Even after being ravaged by 17 years of civil war and extensive poaching, Gorongosa National Park supports astounding biodiversity, with 398 bird species, 122 mammals, 34 reptiles and 43 amphibians having been documented. Comfortable lodgings are available for visitors, and game viewing highlights include elephants, buffalo, lions, crocodiles and zebra.
Four thousand square kilometer Gorongosa Park is located at the southern end of the Great East African Rift Valley. The Park includes the valley floor and parts of surrounding plateaus. Rivers originating on nearby 1,862-meter Mount Gorongosa water the plain. The rehabilitation of Gorongosa National Park in Central Mozambique represents one of the great conservation opportunities in the world today. It is a region of high species diversity and ecological features found nowhere else. Gorongosa National Park offers guided game drives traversing various ecosystems, including floodplains, miombo forest and lowland savanna; a trip to the Vinho Community where one can meet many of the park employees as they commute from Vinho on their way to work.

Ilha de Mozambique : – Also known as Mozambique Island near Nampula in the north. This is a fascinating place, rich in history and culture. Wander along the cobbled streets past stately colonial 17th- and 18th-century buildings on Ilha de Mozambique, the former capital of East Africa. Here you will see tiny reed houses rub shoulders with pastel-coloured colonial mansions among the palm trees. Ilha de Mozambique is an exquisite mix of old Portuguese and Muslim architecture, dividing old Stone Town in the north and Reed Town in the south. This tiny island is accessible via a bridge from the mainland. Because of its size, visitors have an easy walk around the island, 20 minutes from end to end

Niassa Game Reserve : – Twice the size of South Africa’s famed Kruger National Park, this Reserve is arguably one of the most pristine on the continent, and has the best concentration of wildlife in Mozambique. Game includes some 12 000 elephant, 9 000 sable antelope, and very good herds of buffalo, hartebeest, eland and zebra, kudu, impala, wildebeest waterbuck, reedbuck and hippo. In addition, predators such as lion, leopard, spotted hyena and wild dog are regularly seen. Lake Niassa (the Mozambican name for Lake Malawi) is a fresh water lake and forms the border between Mozambique, Malawi and Tanzania. Its clear waters stretch for hundreds of miles surrounded on either side by a wilderness of thick indigenous forest. A variety of tropical fish are to be found in this lake. This reserve is one of the wildest places in Mozambique and is not for the fainthearted.

Ponta D’Ouro : – ‘Surf’s up’ in Ponta d’Ouro, located along a sandy road just south of Maputo, home to some of the most perfect waves in Africa. Offering spectacular dive sites and a wealth of exciting sea creatures to be encountered underwater, Ponta d’Ouro is a popular destination for divers as well as surfers, and swimming with dolphins can be a deeply rewarding, even life-changing experience, not to be missed. Stroll along white beaches stretching far into the distance, and explore the rock pools full of colourful shells and corals.

Quirimgas Islands : – The magnificent Quirimbas Archipelago in Cabo Delgado Province, northern Mozambique, is a captivating chain of 32 coral islands. The Quirimbas Archipelago stretches for 100 kilometers along the Mozambique coast. These tropical islands contain some of the richest coral reefs in the world and provide habitat for an abundant array of marine life. The idyllic islands stretch from the quaint city of Pemba, the capital of Cabo Delgado Province in the south, to the town of Palma in the north. Some of the charming islands in the south include a vast expanse of enchanted forest in the Quirimbas National Park which was established in 2002. The park includes 11 coral islands stretching for 100km. Feeding and nesting grounds for the delightful population of sea turtles, dugong, dolphins, sharks and whales are found here.

Tofo Beach : – Described as ‘the next Goa’, Tofo Beach is situated in the Inhambane Province of Mozambique. It has definitely become a hotspot for young travelers, with beautiful stretches of beach, a friendly laid-back atmosphere, good restaurants and entertaining nightlife. The main draw of Tofo is the natural beauty, with pristine beaches perfect for swimming, diving, snorkeling and other water sports like surfing, kitesurfing and bodyboarding. The area also offers amazing scuba diving at popular sites like Manta Reef, and the chance to spot humpback whales, reef sharks, and whale sharks.

Vilanculos : – Vilanculos is a popular tourist destination and the gateway to the Bazaruto Archipelago, a group of islands incorporated into Mozambique’s stunning underwater national park. On day trips from Vilanculos, visitors can go scuba diving and snorkeling in the clear waters, or enjoy the wonderful views on horse safaris and day rides along the long unspoiled beaches of the Vilanculos coast. Sailing around the archipelago in a traditional dhow is a great way to enjoy the azure waters, sandy beaches, palm trees and coral reefs of the islands. Vilanculos is also a great fishing area, ranked as the best black marlin destination in the eastern Indian Ocean. The Vilanculos area can be explored on foot, and offers a number of good restaurants, a few bars and shops, and a central market in the village of Vilankulo. Although Vilanculos has been experiencing a tourism boom and has decent amenities and great accommodation options, it has retained its local flavour. There is even a new international airport on the outskirts of town, with flights to both Johannesburg and Maputo 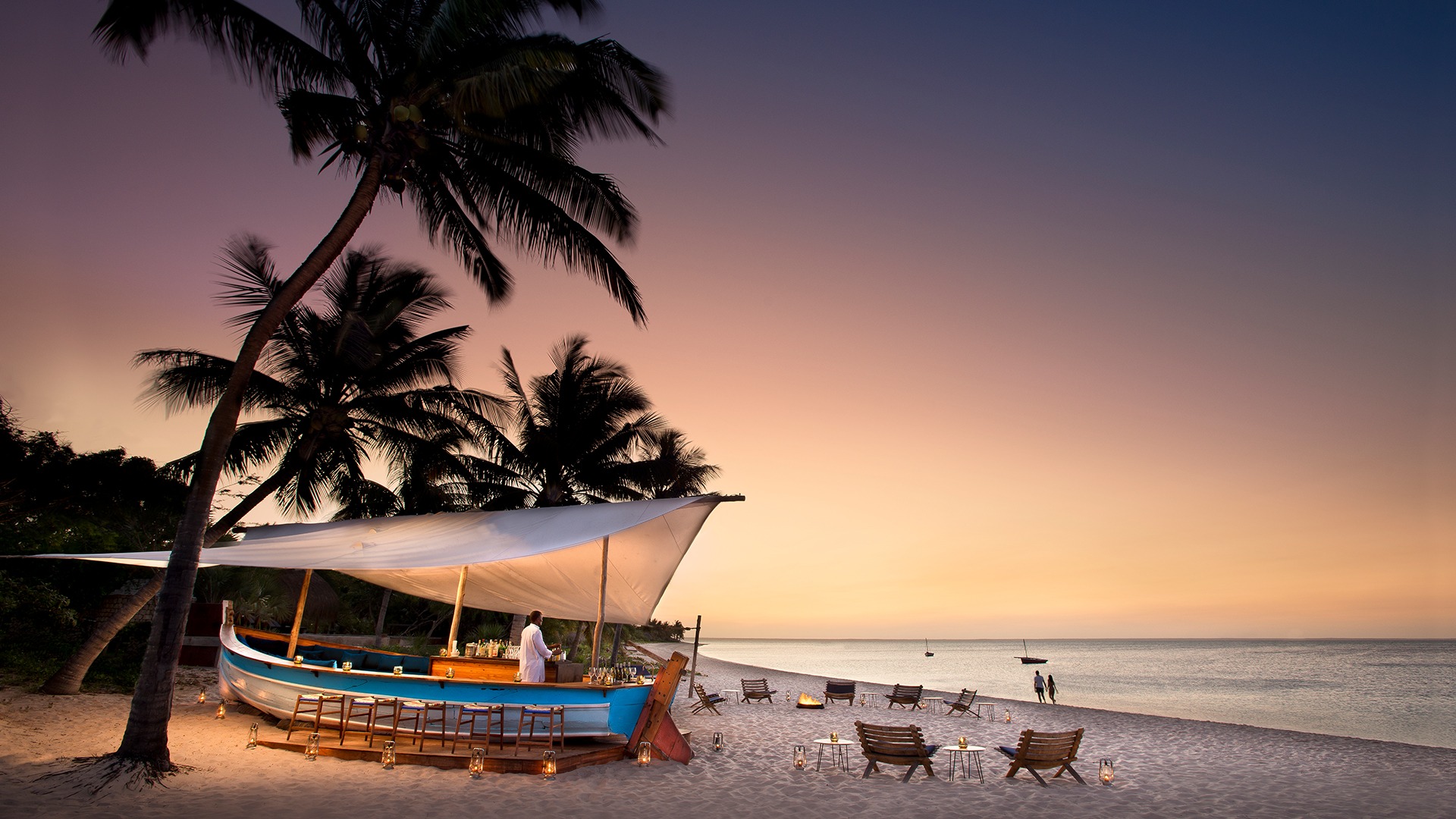